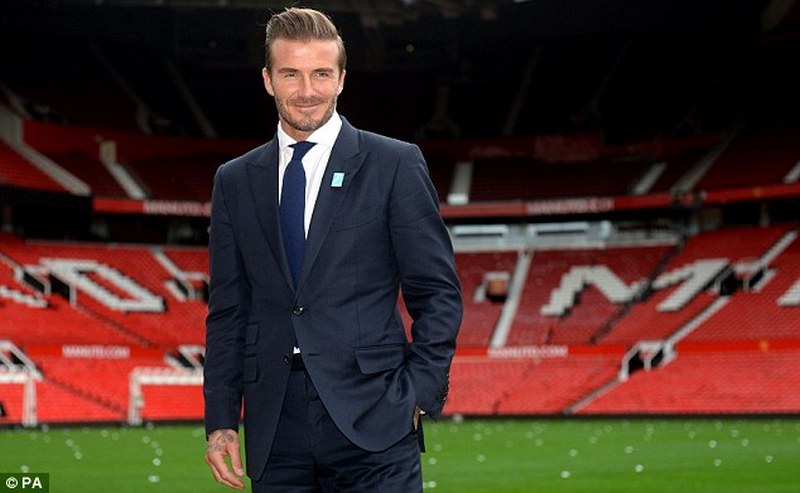 David Beckham is convinced Ryan Giggs will be a successful Manchester United manager one day.

Beckham will grace the pitch at Old Trafford once more next month when he takes part in a charity match which aims to raise funds for UNICEF.

The former England captain spent 11 years playing alongside Giggs in the United first team after coming through the club's famed youth academy.

The Welshman is now assistant to manager Louis van Gaal and Beckham believes it is only a matter of time before the former winger takes the top job at Old Trafford.

'I have always said that Giggsy has this streak running through him that you see in top managers,' Beckham said.

'I saw it as a player. He is so determined and when you have got someone like that at a club like this, someone who is from this part of the world and knows so much about this club - it's so embedded into him - it means so much to fans, so I hope that at some point Giggsy does take over.

'It might not be for the next five or 10 years but at some point it would be amazing for the fans to have him.

'To have Giggsy sat on the line preparing himself to become a manager is exciting.'

Beckham and Giggs won 19 Premier League titles between them under the tutelage of Sir Alex Ferguson, who will return to the home dugout for the charity match at Old Trafford on November 14.

United have not won the title since Ferguson's 26-year reign at Old Trafford came to an end in 2013.

Van Gaal achieved what David Moyes failed to do by getting United back into the Champions League, but there have been murmurings of discontent from outside Old Trafford about the team's style of play under the Dutchman.

United lost 3-0 to Arsenal on Sunday. Had the Gunners taken their chances, the losing margin could have been twice as large.

Beckham still considers himself a United fan, however, and is a believer in Van Gaal's methods.

'I would come and watch this team,' said the former midfielder, who played 394 times for United.

'To see some of the young players we have got coming through in this team, I think obviously you can see what the manager is doing.

'(It was) a tough result at the weekend, but we move on very quickly from these results.'

Beckham will captain a Great Britain and Ireland XI managed by Ferguson against a Rest of the World XI, who will be coached by Carlo Ancelotti.

It is the first time that Beckham has played under Ferguson since their acrimonious split in 2003 after the Scot accidentally kicked a boot that struck the former England captain above his left eye.

Ferguson sold Beckham to Real Madrid four months after the dressing room incident and then criticised the ex-England captain in his autobiography, but the pair are now on good terms.

Ferguson took little persuading when Beckham offered him the chance to take part in the game, which is called Match for Children.

'Bringing the boss back to the dugout means so much to so many people and thankfully we will be doing that,' said Beckham, who revealed 60,000 tickets had already been sold for the match.

'I spoke to him personally and he was more than happy to (get involved).

'My relationship with the manager was always great despite what people say, despite the couple of ups and downs which we had.'

When asked about the famous flying boot incident, Beckham smiled and said: 'Maybe it's one of the things we can recreate.

'Someone mentioned that to me the other day. We will see.'