Another golden generation at Old Trafford 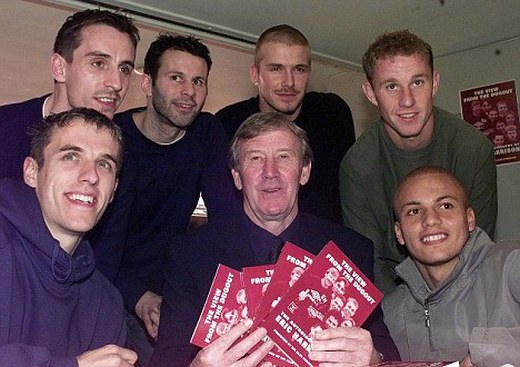 Sir Alex Ferguson has said that Manchester United ‘will’ once again develop a group of young players along the lines of the  Giggs-Beckham-Scholes-Nevilles-Butt generation that so shaped the manager’s tenure at the club from the early 1990s.

Looking at a montage of those players and others at the United academy, Ferguson was asked if that was a one-off and replied: ‘No, it’s not. It’s going to happen again.  You can’t think that Manchester United could have only one cycle of players as good as that. We will always keep chasing the dream.

‘We will get a bunch like that again. We have got to. When the academy system changes to what it should be then we are capable of doing it, getting five or six through at one time again. There’s progress being made on that front at the moment. It’s ridiculous that in 2011 you can only coach a boy within an hour-and-a-half of Old Trafford. Absolutely ridiculous. Barcelona have just signed a player from China, one from Japan.’

Ferguson has lobbied for the change in the academy system, which he viewed as restrictive. The Football League voted for change last month and the adoption of the Elite Player Performance Plan (EPPP).
It means clubs of the scale of United can expand their academy to include on-site education and accommodation. That, in turn, would allow United more coaching time with young players. It means they and others are not geographically limited over youngsters they can scout and attract.

Ferguson has dismissed any talk of his imminent retirement, saying in an interview in France: ‘I think another three or four years yet. It’s still a  long way off.’

The Scot added that the club’s move from The Cliff training ground in Salford to the purpose-built site south of Manchester was the most important change in his 25 years at the club.

‘The great thing was the move from The Cliff to Carrington,’ said Ferguson. ‘That was the best thing that ever happened to the club.
‘It (The Cliff) was an old ground, too small, great history. We couldn’t have achieved what we have achieved now - the number of staff, academy, coaches. We have 110 people at Carrington - without the players - 110 staff here!

‘There was no way we could have accommodated that at The Cliff. The gymnasium, was half the size of this here. We had to move.’

Ferguson will face one of his former players today in Steve Bruce, manager of Sunderland. The 69-year-old Scot begins his second quarter of a century at Old Trafford five points behind neighbours City in the Premier League but said he and United are self-motivated: ‘The challenge is in this place, the challenge is already here.’

Ferguson added that he has ‘always had good energy’ and praised the drive of Sir Bobby Robson that took him beyond 70 as a manager.

‘Bobby was a remarkable person in his enthusiasm and love for the game,’ said Ferguson. ‘He had all his health problems for so long but it never stopped him.

‘He had two or three bouts of cancer in different periods. Most people would have been just happy to get over that and have a nice easy life for themselves. But Bobby, right to the very end, wanted to come back into management.’

Harry Redknapp has had a heart scare this week and managers are under extreme pressure.

‘Once Harry backs a couple of winners he’ll be back on song, don’t worry,’ laughed Ferguson.