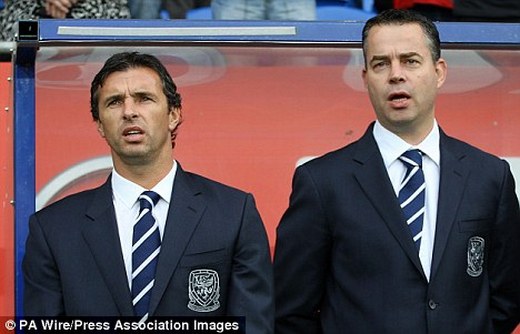 Gary Speed's assistant manager has rejected the choice of Chris Coleman as the country's new boss, sparking an unseemly and bitter battle at the heart of Welsh football.

Dutchman Raymond Verheijen has thrown his weight behind the appointment of either Ian Rush or Ryan Giggs in an attempt to 'protect' Speed's legacy.

And that has left Football Association of Wales chief executive Jonathan Ford with a major headache ahead of a qualifying campaign for the 2014 World Cup.

Officials at the FAW in Cardiff had identified the former Fulham manager as their first-choice to replace Speed.

But Verheijen, who is believed to have the backing of several influential players within the Wales squad, says that it is pointless overhauling what Speed put in place. He is asking instead for a figurehead to work within the framework set up by his late boss.

'Obviously, it is a very delicate and sensitive situation. But Gary has left behind a successful system. It is working very well.

'I would hope everyone would understand that all we need is a figurehead to step in.

'What we don't need is a manager with his own ideas and his own people because what has been built up could be destroyed over a period of months.

'I feel that either Ryan Giggs or Ian Rush would be perfect to fill that role. They are true Welsh footballing legends and men who can be identified with the footballing public in Wales.'

Verheijen, who has worked alongside Guus Hiddink at three World Cup finals, added: 'It's almost like people don't realise what an incredible improvement the players have made.

'Given that success you would expect that the FAW might consult Gary's number two along with his captain. (Aaron Ramsey) I haven't spoken with them.

'We must protect and cherish this winning formula.'

Raymond Verheijen was speaking on behalf of the UK Football Academy Coach Institute and has today dedicated its' launch to Gary Speed. The 'Gary Speed Football Congress' at the Emirates Stadium on Feburary 8 is supported by the LMA and PFA and will become an annual fundraising event on the football calendar.