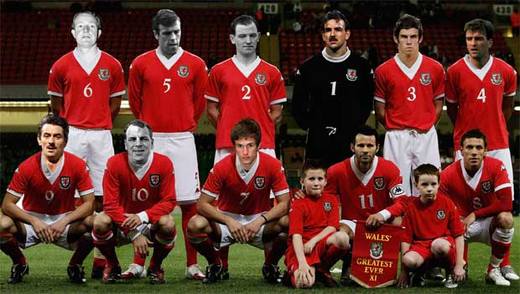 GARY SPEED doesn’t need to give a team talk this week.

Instead, just before he sends his side out to take on odds-on favourites England at a sold-out Millennium Stadium on Saturday, he should just read out this team.

Some of the greatest players to have graced the game – and every single one of them at their proudest in the red of Wales.

That team, lined-up together above, has been officially voted by you, the Wales on Sunday readers via WalesOnline, as Wales’ Greatest XI.

And if that group of greats isn’t inspiration enough for Speed’s side on Saturday, we don’t know what is.

“It’s amazing to think that such a small nation can produce players like that,” said Ian Rush, voted in as the man to partner the legendary John Charles in a strikeforce that would leave any defence in the world trembling.

“That just shows to me it’s not about how big you are as a country or how big a team you are, it’s the players in the shirts that matter.

“I certainly would have loved to have played in that team because you know you would get chances with that midfield and John Charles winning everything in the air.

“Add in a defence that if they did get beat would have ‘Big Nev’ behind them and it would be a dream to play in.

“And I’m sure I speak for everyone honoured enough to be named to say thank you for all who voted for us.”

Rush and Charles ran away with the voting in attack, as did goalkeeping great Neville Southall, Gareth Bale at left-back, Alf Sherwood on the opposite flank, ‘Golden Boy’ Ivor Allchurch in midfield and Manchester United’s Welsh wizard Ryan Giggs on the left.

And a pace and power centre-back partnership between Mike England and Kevin Ratcliffe clearly had your vote.

Other positions were a lot more closely fought, with Craig Bellamy edging out greats like Billy Meredith and Terry Medwin while Aaron Ramsey edged out boss Speed in the heart of the midfield.

And there was hardly anything to choose between Jimmy Murphy, the man who took us to our only World Cup finals in 1958, and Mark Hughes – ‘Sparky’ getting the nod as the man to lead our side.

But seeing as Murphy was a brilliant assistant to Sir Matt Busby at Old Trafford, we’re sure he could form part of the backroom team in this fantasy side to rule all others. Yet perhaps the biggest boost is to see three of our current crop make the cut – suggesting the best is yet to come for Welsh football. “We’ve been fortunate to see some fantastic players play for us over the years, but to see the likes of Bale and Ramsey in there shows we still are,” added Rush.

“And they are players who can get even better. I’m sure there’s even more players to come through and threaten our places in that side.

“And hopefully there’s time for someone to make a name for themselves on Saturday!”