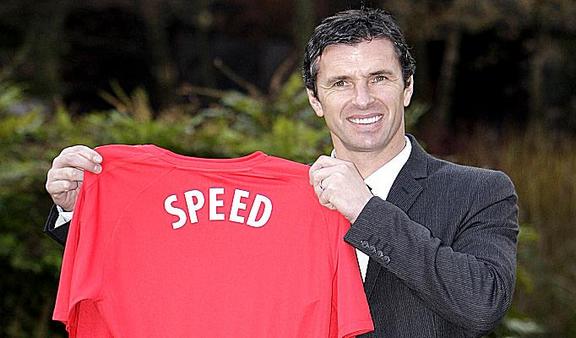 Gary Speed has opened the door to the prospect of senior players who prematurely retired from international football, including Ryan Giggs, returning to represent Wales against England next year in his first competitive match as manager.

Robbie Savage has already contacted Speed with a view to playing for his country again, although it is the thought of Giggs returning that would generate most excitement among the Welsh public.

Although Speed has his sights on the future and is targeting qualification for the 2014 World Cup finals in Brazil, he plans to spend the next fortnight "ringing around" to sound out whether those who retired under his predecessor, John Toshack, could be tempted to reverse their decision.

As well as Savage, who has been enjoying a renaissance at Derby, Speed is expected to speak to Fulham's Simon Davies and West Ham United's Danny Gabbidon. He will also meet Craig Bellamy, who controversially missed Wales's qualifiers against Bulgaria and Switzerland last month, to see "what his plans are".

Convincing Giggs– never mind Sir Alex Ferguson – that it would be a good idea to turn out for Wales again promises to be a much more difficult hurdle to overcome, although Jonathan Forde, the Football Association of Wales chief executive, was keen to stress that the door will always be open for the Manchester United player.

"If at any time Ryan wanted to come back in any form, we'd be delighted to have a conversation," Forde said.

Ferguson was strongly resistant to the idea of Giggs managing Wales when he was linked with the job in September and it seems likely the United manager will also discourage any talk of the 37-year-old playing for his country again.

A more realistic proposition, and one that may interest Giggs, could see Speed approach his former international team-mate about the possibility of becoming involved in the Wales coaching set-up on a part-time basis.

Speed, whose managerial experienced is restricted to the four months he spent in charge of Sheffield United this season, is aware he has a huge task on his hands. "It's my job to lift Welsh football from top to bottom," said Speed who has inherited a team that lost their opening three Euro 2012 qualification matches and have slipped to 111 in the World rankings. "We need to consistently compete on a world stage, not just coming close to qualifying every 10 or 12 years."

The 41-year-old admitted he is already looking forward to the England fixture at the Millennium Stadium in March. "It's a great game because we haven't had the best start to the group, so the pressure will be on them," he said. "If I was a player I would thoroughly be looking forward to it because it's a no-lose situation, and it's something that could kick-start us. It will be a difficult game but it could be a good time to play them, but only because it will be my first competitive game. Hopefully that will give the players a lift."