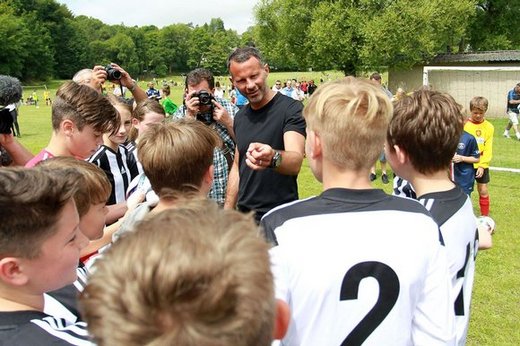 He's won almost everything a professional footballer can win – and Ryan Giggs has been sharing his expert knowledge with youngsters in Mumbles this afternoon.
The Manchester United and Wales legend paid a visit to Underhill Park, the home of Mumbles Rangers, oversaw a training session with youngsters of all ages, and meeting parents and players.
He was there in his capacity as McDonald's head of Welsh football, to acknowledge the success of the club which has around 30 teams for children and young people of both sexes, and of ten of their coaches who have have achieved their Level 2 (C certificate) coaching award.

Ryan Giggs said: "I enjoy doing this kind of grassroots event. I have been involved with McDonald's now for over a year and it's been great to see the work they do.
"They have been involved with the FAW for 13 years doing grassroots football and it's always good to come to clubs like this because I was at a club like this when I was younger.
"You see the impact it has on your life, the community feel that you got and the great work that all the coaches and management do."
Earlier this year Mumbles Rangers achieved the Gold Award in Welsh Football Trust national club accreditation programme.