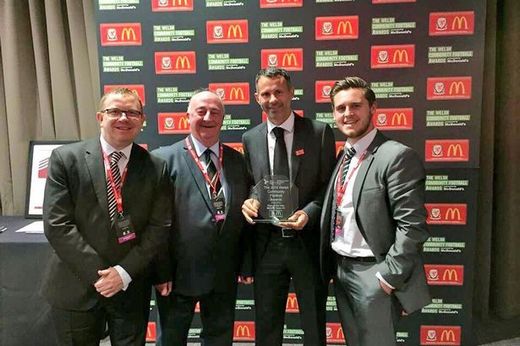 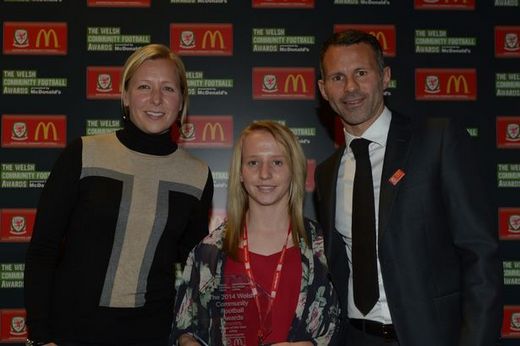 Lauryn Lyons from Hawarden was presented with the Player of the Year (girl) award by Ryan Giggs and Jayne Ludlow at the The Football Association of Wales (FAW) Community Awards
“I have experienced it first-hand.
“Sometimes these are people who are unsung heroes who have really put in the hours.”
At last year’s awards, Giggs spoke about the influence of his own Sunday league coach Dennis Schofield when he was starting out in the game as a 10-year-old.
He stressed that those who dedicated themselves to coaching and volunteering were essential to ensuring youngsters could enjoy the game they loved, whatever their aspirations.
This year, there are eight award categories: Club of the Year, School of the Year, Community Coach of the Year, Performance Development Coach of the Year, Volunteer of the Year (The People’s Award), Young Volunteer of the Year, Lifetime Achievement and the Grassroots Impact award.
“Both boys and girls get into schemes in the community,” Giggs said.
“I went to the awards for 2014 and all types of people were receiving the awards - old, young, boys, girls - it’s great to see.
“It’s still a big part of British culture. With me being Welsh and the Welsh ambassador, it’s important for me to get down to as many clubs as possible.
“The awards was a great night.
“Not everyone can win but it’s a tough choice to pick out who does win because I’m sure there are hundreds of people worthy of it and it is important they are recognised and can then go on an push on further.”
The Welsh Community Football Awards, presented by McDonald’s are now open. To vote for a football club or volunteer go to www.mcdonalds.co.uk/awards