Ryan Giggs portrait to be hung in National Library of Wales 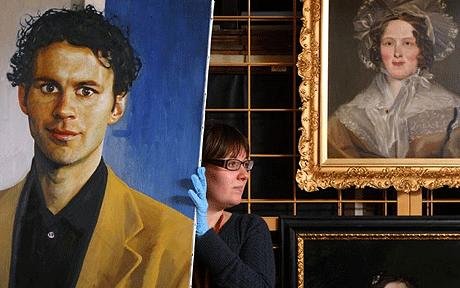 The Library spent £10,000 to buy the painting of Giggs, which will be placed at its Aberystwyth headquarters.

Giggs has played 63 times for his country and scored 12 goals.

The 35-year-old posed for three sittings for the painting by artist Peter Edwards 10 years ago but it was only completed last year.

Library spokesman Paul Joyner said: "Ryan is an example of one of our great Welshmen and it is a lovely portrait.

"The painting shows him as a slightly shy but very determined and deep person."

He said: "Ryan was very down-to-earth and quietly spoken but very friendly.

"You sometimes worry that you are going to be disappointed when you meet a famous person but I thought he was a very nice young man."

The National Library is now keen to add further to its collection of portraits of sportsmen and women.

Olympic gold medal cyclist Nicola Cooke and boxing champion Joe Calzaghe are on the top of their list.

Mr Joyner said: "I'm really keen to get a portrait of Nicole Cooke on her bike and one of Joe Calzaghe as I think he's a great ambassador of Wales."