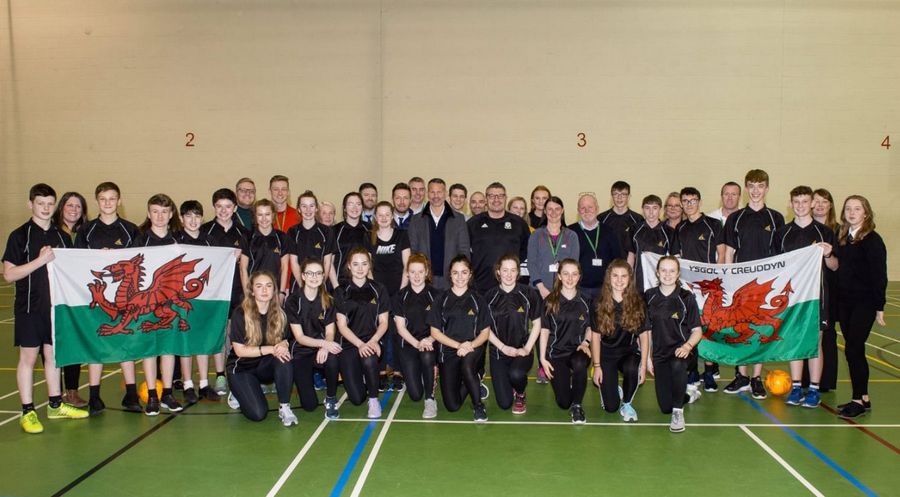 Pupils at Ysgol y Creuddyn has received a surprise visit from one of footballs biggest names.
Former Manchester United star and current Welsh manager Ryan Giggs paid a visit to an unsuspecting group of pupils at
Ysgol y Creuddyn on Tuesday, March 12 following the announcement of the squad at Venue Cymru for the first Euro 2020
qualifier. Welsh assistant manager Osian Roberts at Ysgol y Creuddyn
"The reaction of the young people when Ryan Giggs walked into the room was a picture of surprise and delight - it
was a great sight to see.
"To have someone of Ryan's stature coming to the school and spending time talking to and answering the
questions of the pupils has given them a huge boost and created a wonderful buzz around school.
"We would like to thank the FAW and the school's Head of PE Mr Eifion Williams for arranging this
visit.”
Pupils said it was an amazing experience to meet one of the best players to ever pull on a Wales guernsey.
Noa Williams, year 10 pupil, said: "It was a privilege to meet Ryan Giggs and Osian Roberts at our school. I have
so much respect for them, especially as I view Ryan Giggs as one of the best players ever to play for Wales.”
Cerys Vick, year 13 and Platinum Young Ambassador for School Sport Wales, said: “It was an exciting opportunity
to ask Ryan Giggs the questions that interest us and inspiring for many of the aspiring football players to hear his
stories and tips." Ysgol y Creuddyn Pupils enjoying the Q&A with Ryan Giggs
The Ysgol y Creuddyn PE department under the leadership of Mr Williams have offered numerous opportunities for
learners to follow and support Wales’ football team over the years.
Visits have been arranged to the Racecourse at Wrexham for the match against Trinidad and Tobago and also for the
Wales v Slovakia UEFA Euro qualification round at the Cardiff City Stadium.
Many learners also benefited from the opportunity to attend an FA Wales open training session held at Wrexham in June
last year.
Gwenno Mair Davies, Ysgol y Creuddyn assistant headteacher, added: "As a school, we are always eager to celebrate
being Welsh – our language, culture and the successes of our Nation.
"Offering our learners to follow and support the success of our national football team is one aspect of a
numerous of activities held at Ysgol y Creuddyn to show our pride in our language and our country.
"Therefore, it was an honour to receive a visit from Wales’ National Football Team’s manager and
assistant manager and we’re extremely proud and grateful that our learners, staff and the PE Department were
rewarded with what was an incredible treat."