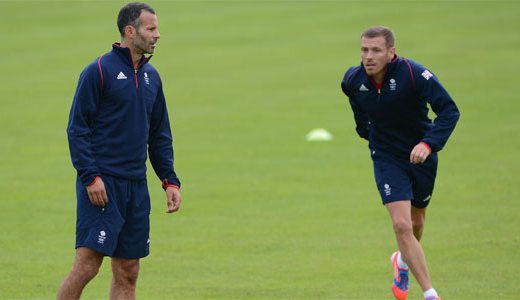 RYAN GIGGS believes Wales will emerge the big winners from the London 2012 experience and reiterated his wish to see the Team GB concept continue at future Olympic Games.

The Welsh legend’s hopes of leading his team into a mouth-watering semi-final showdown with Brazil, and hopefully a gold medal beyond that, ended with that penalty shoot-out agony deep into the Millennium Stadium night.

Those dreams disappeared when Chelsea’s Daniel Sturridge missed his crucial spot-kick, while the South Koreans were positively German-like in nailing five out of five.

But Giggs, who never reached a major finals with Wales, says he has ‘cherished’ every single moment of international tournament football and reckons the Welsh young guns in Stuart Pearce’s side will be the ones to really reap the rewards.

The stock of Wales skipper Aaron Ramsey, his £15m-rated midfield partner Joe Allen and left-back Neil Taylor has soared with the manner in which they have acquitted themselves on the Olympic stage.

And Giggs said: “I never had the chance to experience this sort of thing with Wales, but I hope these youngsters do in future World Cups or European Championships.

“It’s been a marvellous experience for me, one I will always cherish. It doesn’t make up for missing out with Wales, that will always be the biggest disappointment of my career.

“But it has been a huge privilege to captain Team GB at a home Olympics and for me the experience can only be positive for Wales.

“These young Welsh players will go away from here with invaluable experience of the day-to-day demands of tournament football.

“As I say, that’s something I never experienced myself. They have done, and if they go on to qualify for a finals they will know what to expect when it comes around.

“That’s so important. They will be better players for what they have just gone through.

“Look, we’re out. Anyone can lose on penalty kicks. But we went through the tournament unbeaten and I think we’ve attracted a new set of fans, people who wanted to sample the Olympic experience.

“The people of Wales have been incredibly positive towards this whole concept. They have been desperate for this type of tournament football for their own country, and they have certainly bought into the Olympic experience played out on their own doorstep.

“With regards the future, I would want to see players, whether young or over-age like me, go through what I and the others just have. It has been a truly wonderful few weeks.

“From the outside there may still be the odd sceptic, but from within the camp every single player will talk highly of what we have experienced.

“Yes, it would be great if others were to have this opportunity in the future, too.”

Team GB manager Pearce believes the moment may be over, though, saying: “While it’s been fantastic, I don’t think it will happen again.

“Home advantage has enabled us to have this opportunity. But when you look at the football programme here, and the fact there are four home nations, I’m not sure we can bring this together again.”

Pearce and Giggs probably knew deep down what was coming when the Saturday night’s quarter-final tie finished 1-1 after extra-time and headed for those dreaded penalties.

It’s fair to say neither man has the best of memories when it comes to spot-kicks in major international football.

Pearce, of course, infamously missed from 12 yards in England’s World Cup semi-final defeat to Germany in Turin back in Italia ‘90.

Three years after that, Giggs watched aghast as Paul Bodin crashed and burned from a penalty against Romania as Wales bombed out of the World Cup at the Arms Park.

Korea’s manager Myung Bo Hong even stated afterwards he was confident of winning the shoot-out, given England’s woeful record with penalties down the years.

Asked if he thought there was a certain sense of inevitability about it, Pearce insisted: “No, I thought we were favourites to win.

“We have practised them from day one and I was confident. You have to give credit to Korea for the way they tucked theirs away.”

However, while Team GB bowed out in the most unfortunate manner possible, if you are being critically honest you have to say they were victims of their own downfall.

During normal time, after Ramsey had scored from a penalty to cancel out Dong-Wong Ji’s 29th-minute opener, he was given a second crack when Sturridge was fouled in the box shortly afterwards.

Unfortunately, Ramsey shot at goalkeeper Sungryong Jung and the opportunity to win the game in normal time went begging.

Pearce himself made a selection clanger, in my eyes, by leaving out Giggs and picking Scott Sinclair. He then compounded the error by only sticking on his potential talisman five minutes from time.

Straight away, Giggs displayed the sort of vision, creativity and awareness which had otherwise been lacking from a tepid Team GB performance.

The other area in which Team GB let themselves down was in that final decisive penalty which Sturridge missed.

In such a high pressure situation, what on earth was he doing changing his run-up and then trying to fool the goalkeeper with a daft dummy?

This was not parks football, where that sort of thing happens with youngsters every single day of the week. It was the quarter-final of the Olympics, being played out in front of a capacity Millennium Stadium crowd, the eyes of the world watching.

Sturridge should just have walked up and whacked the thing into the net, thus putting pressure on the Koreans, not tried to be a clever clogs.

Pearce said afterwards that the players took collective responsibility for what happened. Yet I don’t see why Giggs, Ramsey, Bellamy, Allen and Taylor should take any blame whatsoever for what I believed to be an unnecessary act by Sturridge.

His attempt to be ultra-clever backfired... and cost a nation badly.

Sturridge’s miss means the Team GB experience is over. Probably for good. But after the hoo-hah we had building up to this football tournament, it’s fair to say Giggs and the rest have done us proud.

Roll on the World Cup qualifiers.