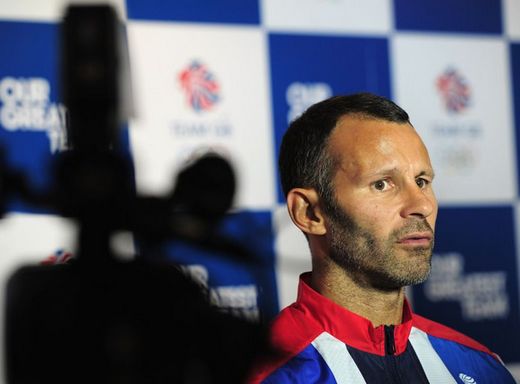 TEAM GB skipper Ryan Giggs feels Welsh football’s doom-mongers have nothing to be worried about by the presence of five Welshmen in Stuart Pearce’s Olympic squad.

Moreover, Giggs believes London 2012 will prove beneficial for Wales in their bid to end a 50-year-plus absence from major tournaments.

Giggs was yesterday named Pearce’s captain for a football competition which has drawn as much negative reaction in Wales as positive response since it was known there would be such a heavy Welsh presence in the 18-man party.

The Football Association of Wales wanted their players to take no part in the tournament, fearing it would jeopardise the nation’s sovereign status within Uefa and Fifa.

But Giggs dismisses such stories and reckons the presence of Wales skipper Aaron Ramsey, Craig Bellamy, Joe Allen and Neil Taylor at London 2012 will help Welsh attempts to qualify for tournaments in the future.

“I don’t think it will ever happen that a Great Britain team will play at World Cups or European Championships,” said former Wales captain Giggs, who retired from international football in 2007 after winning 64 caps.

“The Olympics is a one-off and, when it comes to European Championships and World Cups, England, Wales, Scotland and Northern Ireland will always have its own identity.

“I’ve been aware of what’s been said in Wales, that little bit of negativity at the Welsh players meeting up.

“I suppose you’re going to get a bit of that, but the players wanted to be part of it.

“Personally, I think for the Welsh players coming into the squad it can only help them – and help Welsh football when it comes to qualifying.

“It’s a different experience and environment and that can only help them both in the near and long-term future.

“That starts with the next World Cup campaign and we’ve got some really good young players in Wales.

“A few of them are part of this squad and this experience will help them, I’m sure it will.”

Giggs – 39 in November – has won everything in a club career which has spanned two glorious decades at Manchester United.

But he never made it to a major international tournament in the red of Wales and, while that remains a deep regret to this day, he admits the Olympics offers him a chance to sample an environment he thought had passed him by.

“It’s a massive honour to be involved in the Olympics and, as a 38-year-old, you don’t expect to be involved in a tournament like this on home turf,” said Giggs, chosen as one of three over-age players alongside fellow Welshman Bellamy and England defender Micah Richards.

“It ranks very high in my career and obviously the honour of captaining the squad as well is massive.

“I hope I can pass on the experience I’ve gained over the years as well as the winning mentality.

“I’m open to any of the players coming up and having a chat if they want, but it’s not just about me.

“Micah won the Premiership last year at Manchester City and Craig’s won things and been at so many good clubs during his career.

“The experienced players can really help the young players.

“I never got to a major tournament with Wales and that will always remain as a massive disappointment in my career.

“I’ve not played in tournament football and I’m thankful of getting the chance. I’m really looking forward to it and can’t wait for it to start.

“This is something that I never thought would happen, but as soon as I got the chance to put my name forward for the Great Britain team I jumped at it and really wanted to be part of it.”

But Giggs admitted that winning Olympic gold is going to be far from easy for Team GB who find themselves in the same group as Senegal, United Arab Emirates and Uruguay for starters at London 2012.

“It’s going to be tough, there’s a lot of good teams and good footballers in the tournament,” he said.

“But as the home nation and with the players we’ve got we’ve got a chance.

“I never like to say that one trophy is more important than the other.

“They’re all great experiences and they’re all different experiences, be it winning the Champions League in the last minute or winning a hard-fought league.

“I’ve been fortunate to win a lot in my career, but you never think as a footballer you’re going to win an Olympic medal, but, hopefully, that will be the case now.”

Whatever the outcome next month, Giggs admits he has been swept up by the Olympic fever sweeping the country.

And he says that has even been the case at home with his two young children.

“The kids are excited – I think every school in Britain is preparing for the Olympics – and my kids are no different,” he smiled.

“A few months ago they were asking me ‘Daddy, are you going to be playing in the Olympics?’ I said ‘I don’t know, we’ll have to wait and see.’

“So they were happy when I made the squad.

“It’s just great to be part of it because I grew up watching the Olympics.”