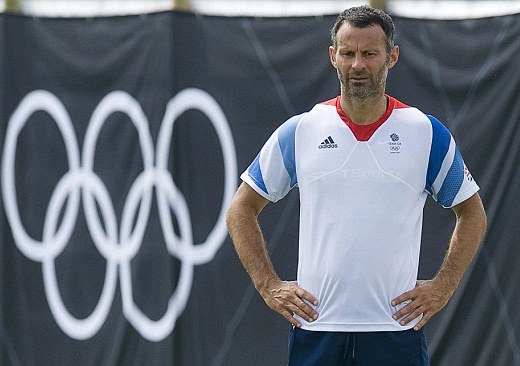 Ryan Giggs didn't look much at home with "God Save the Queen" when he stood on the Middlesbrough pitch for his Great Britain debut last Friday and it will clearly take something other than the anthem to summon up that passion in him which Wales knows as hwyl. But the captain of Stuart Pearce's side will tackle the last unfulfilled ambition of his playing days – international achievement – when he takes the side out to face Senegal tonight on the turf which he has called home for 21 years.

It is easy to assume, as Giggs sits down to discuss the game in an Old Trafford suite – adorned with framed images of Manchester United's European conquests, in two of which he holds the European Cup – that the Olympics cannot hold a torch to all that. But the disappointments of Giggs' Wales career are more crushing than many realise.

"I'm still disappointed I never got to a major championship with Wales, but we weren't good enough to get to a European Championship or World Cup," he said, and it was not just the despair of the last-gasp defeats in Romania and at home to Russia – which denied him a place at the 1994 World Cup finals and the 2004 European Championship respectively – but the sheer, maddening amateurism at times.

Giggs always remembers the day the squad arrived at Stansted, early in the Mark Hughes era, to find that they were fully a ton and a half over their excess baggage allowance. Hughes had to ask 13 of the nation's fans if they would mind catching a later flight, to allow them to get all their gear on board. That was the same season Wales called up Ipswich Town's David Johnson, only to learn he had already played for England B.

But it is another unhappy Wales occasion which the 38-year-old recalled ahead of tonight: the 2006 World Cup qualifier against England at Old Trafford, which is the only time he has played here in colours other than United's. "It is going to be strange," he said. "I have only done it the once and it was [especially] strange that day because I was in the away dressing room."

Don't get Giggs started on that October afternoon against the English. Robbie Savage was suspended, experienced centre-half Alan Melville was injured in the warm-up and England lined up with three strikers – Michael Owen, Wayne Rooney and Jermain Defoe – which Hughes, already juggling Wales with his new job at Blackburn Rovers, had not expected. Gary Neville kept running past Giggs and making him chase. Nutmegging Neville and Nicky Butt were his only good moments in a 2-0 defeat.

Giggs, whom Pearce has involved in his coaches' meetings, now seems unburdened in a way that he never was with Wales. The encounter with Dame Kelly Holmes at the Olympic Village two weeks ago was particularly inspiring for Pearce's older players, with their greater sense of perspective. "The other day we were with the divers and the swimmers," Giggs added. "You normally wouldn't get a chance to spend time with them."

And, of course, there is not the presence of Sir Alex Ferguson on his shoulder, brooding at the sight of him playing too much football. That factor explained one of the more bizarre statistics of Giggs' Wales career which began in 1991 but didn't include a friendly until March 2000. "Right from the start, he wanted me to be a part of this," Giggs said of Ferguson.

International captaincy seems to fit him better now. His three experiences of it for Wales all brought defeat, not to mention his first ever dismissal on the second of those occasions – a bitter 3-2 defeat in Oslo. "The onus is on me as captain and the most experienced player," Giggs said.

Pearce, by naming Giggs in his squad, effectively left himself no option but to exclude David Beckham, as two players of that generation would not be the selection of any manager seeking gold. The captain, deployed in central midfield against Brazil on Teesside, provided GB's one opportunity of the 2-0 defeat – a dangerous free-kick which Manchester City's Micah Richards could not convert. But Pearce will need more tempo from those deployed around him if GB are to defeat a Uruguay squad equipped with Luis Suarez and Edinson Cavani, in Cardiff next Wednesday, thus setting up a quarter-final against the runners-up of Mexico, South Korea, Gabon and Switzerland, three days later. (Senegal tonight and the UAE on Sunday really ought to be regulation wins).

Giggs' compatriot, Joe Allen, looked perhaps Pearce's sharpest player against Brazil, though that performance – with its criminal concessions of possession – put medal aspirations into perspective. Giggs has reached an international finals tournament at last, however, and he won't deny himself the indulgence of discussing medals. "As a footballer, you don't start out in your career hoping to win the Olympics," he said. "You want to win leagues, FA Cups and European Cups. This is different but [any kind of medal] will rank highly. This would be up there. Hopefully, we'll get the chance to go a long way."

No surprise they are favourites, with Thiago Silva at the back along with attackers like Neymar, Leandro Damaio, Alexandre Pato and Oscar. With no World Cup qualifiers to contest as 2014 hosts, coach Mano Menezes needs this tournament. Seeking a first Olympic gold.

World Cup semi-finalists and Copa America winners... and coach Oscar Tabarez means business again. Luis Suarez and Edinson Cavani are a dangerous overage player combination and there is an abundance of youth to flourish around these two.

Stuart Pearce has been spiky about the lack of England's fringe players from the Euros. Meanwhile, Vicente del Bosque has Juan Mata and Jordi Alba as well as the next generation: David de Gea, Cesar Azpilicueta, Iker Muniain, Adrian Lopez and Ander Herrera.

A possible lack of tempo and no wealth of experience but in Ryan Giggs, Tom Cleverley, Daniel Sturridge, Jack Butland and Joe Allen there will be threats – and a winnable quarter-final if they can overcome the odds against Uruguay in the last group game.

Fernando Tena's youthful squad arrive with the confidence of having won the Under-21 Toulon Tournament and they have the experience of Giovanni dos Santos plus one-time Cottager Carlos Salcido. Group B, with Switzerland, Gabon and South Korea, is helpful.

No Shinji Kagawa or Keisuke Honda but their young players may just invigorate the tournament. Such faith is invested in those who qualified for London that they've brought only two over-23s. Look out for midfielder Takashi Usami, on loan at Bayern Munich last season.