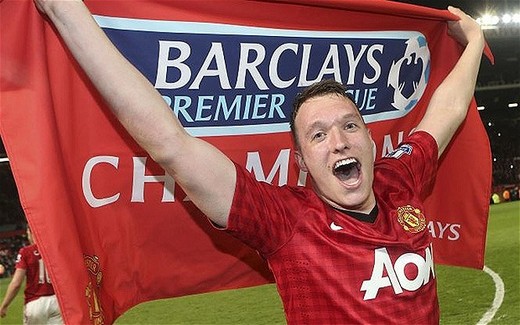 The 21-year-old impressed at centre back in United’s title winning performance on Monday night against Aston Villa, but can play in midfield or at full back.

And Giggs – who will collect his 13th Premier League medal this year – believes the former Blackburn Rovers man is among the best players he has ever played with.

“He was outstanding against Villa,” Giggs told Sky Sports. “Phil is one of those players who's that good he can play midfield or right-back, but I think Monday you've seen his position.

“Every time he plays at centre-half he's outstanding.”

The Red Devils stalwart also believes last season’s heart-breaking league title collapse, which allowed neighbours City to lift the trophy, will act as a lesson to Jones and his young teammates.

“He's such a young lad, that he'll only get better and better,” said Giggs.  “Experiences like last year and this year will help him - disappointment can also help you in some ways.

“There are a lot of young players in there who have learned from last season and have gone on and played really well consistently this season, which is hard for a young player.”

The 39-year-old praise for the Old Trafford starlet came after United boss Ferguson touted Jones as potentially the ‘best ever’.