Ryan Giggs is a boyhood idol of Aaron Ramsey 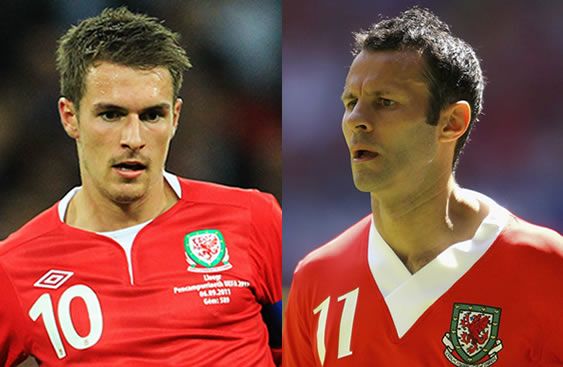 Arsenal midfielder Aaron Ramsey will fulfil a lifelong ambition by finally lining up alongside Ryan Giggs with Team GB at the 2012 London Olympics this summer.

The 21-year-old never got the chance to play with the Manchester United veteran for Wales, as Giggs retired before Ramsey arrived on the international scene.

However, after Stuart Pearce named both players in his 18-man squad for the Olympic Games - Giggs as one of three overage inclusions in his under-23 team - the pair will be teammates in the collective bid for glory later this month.

"It's fair to say that this could be a once-in-a-lifetime experience," explained Ramsey. "Ryan Giggs retired from international football before I got into the Wales team and he's an absolute icon in Welsh football.

"He's done it all and most players would like to play alongside him, so hopefully I'll get my chance. I can certainly learn from him while I'm with the Great Britain squad."

Ramsey was just a baby when Giggs made his Wales debut in 1991, and grew up watching the 38-year-old excel for club and country. He retired from the national team in 2007 to concentrate on his Old Trafford career, which is set to extend into a 23rd season in 2012-13.

Giggs won 64 caps for his country in total, netting 12 goals, but never represented Wales at a major tournament. The opportunity to lead Team GB out at the London Olympics will be an honour for the most decorated player in English football history.

"Looking at the squad of players we have, I think we have a lot of quality in there," Ramsey added. "I'm sure we can do well, especially with home advantage."

Pearce's side kick-off their campaign against Senegal on July 26 and also face the United Arab Emirates and Uruguay in the group stage.