Ryan Giggs at 40: Forget boo-boys, winger is a Wales great When the question is raised as to the greatest players never to have appeared in a major international tournament, Ryan Giggs certainly deserves a place in the list.

It is a moot point as to where the evergreen star sits among the likes of George Best and George Weah - but as far as Wales football is concerned, the Manchester United man certainly made a huge contribution.

His overall influence is, however, a matter for debate. Hard-line supporters in the Principality last week questioned the commitment of a man whose life at Old Trafford would have been made a heck of a lot easier had he not donned the red shirt of his country as frequently as he did.

Incredible as it may seem to some, Giggs was subjected to jeers when his club visited the City of Cardiff Stadium last Sunday. Harsh? Yes. Fair? That depends on your point of view.

There is more than a fair chunk of Wales supporters who have not forgiven him for a perceived slight when he turned his back on international friendlies for almost a decade.

But the most decorated Welshman in history probably has suffered worse. Nevertheless, in an international career during which he still picked up 64 caps, standing 12th in the all-time list, it is likely those barbs would have hurt. 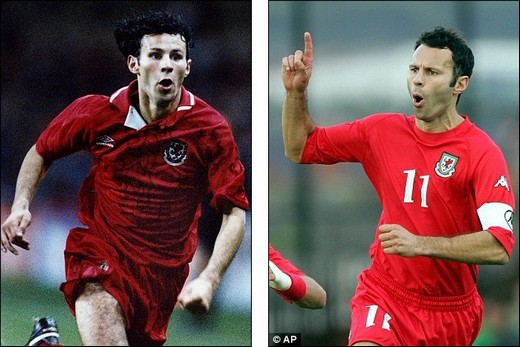 Young Dragon: Giggs in action for Wales against Czechoslovakia in September 1993 (left) and celebrating scoring the winning goal against Northern Ireland in World Cup qualifying in October 2005 (right)It was never an option in Giggs's mind - born in Cardiff to Welsh parents - to have played for England - even though he represented them at schoolboy level.

By that time, the youngster was part of society in Salford and had to play for the school that he attended.

But as soon as he was able, he came through the junior ranks with Wales, playing for both the Under 18 and Under 21 sides before he was handed his debut in Nuremberg by Terry Yorath against Germany.

At that stage, Giggs was the youngest-ever Wales international. But such was the furore that his first appearance for his country caused that when Yorath returned home, he was contacted by a furious Sir Alex Ferguson and accused of piling too much pressure on the prodigy.

Young lion: Giggs, (second right, front row) played for the England schoolboys team as he attended a school in Salford after joining Man UnitedNo matter. Yorath pursued the only course open to him - he played the winger in a World Cup qualification game in Belgium and Giggs scored a virtuoso goal that made the whole of Europe sit up and take notice. 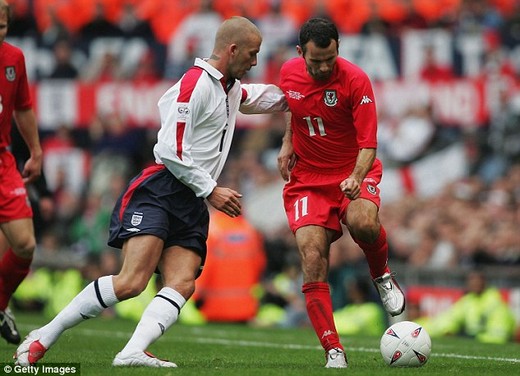 Friend and foe: Giggs comes up against former United teammate David Beckham while playing for Wales 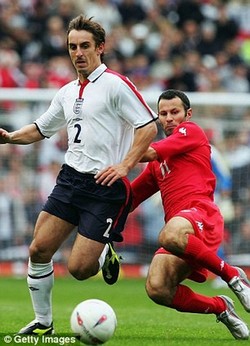 But it was not to end in glory.

The hopes of his nation of sparking a party in the United States disappeared in the final match when Wales were beaten by Romania. Giggs was not to come as close again to qualifying for a tournament for almost another decade.

By now it was clear Wales had an emerging talent on their hands.

Unfortunately, the decision had been taken by Ferguson that he was not to be released for friendlies.

It is likely that the player - still young, don't forget - did not feel sufficiently secure in himself to defy the wishes of his manager. After all, the Scot did rule his kingdom with a ruthless zeal.

So, the player himself was caught in a Catch-22 situation. His problems were not helped either by the fact that just as his star was on the ascent, others were on the wane.

Some of his illustrious international colleagues were nearing the end of their playing days. The likes of Mark Hughes, Kevin Ratcliffe and Neville Southall were close to retirement and a new breed of were trying to make their mark.

It was not until Hughes returned as head coach that Wales were able to challenge once more. 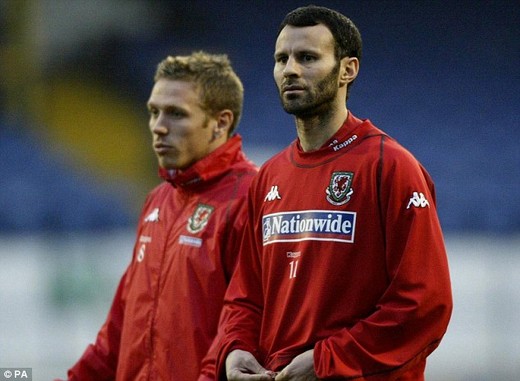 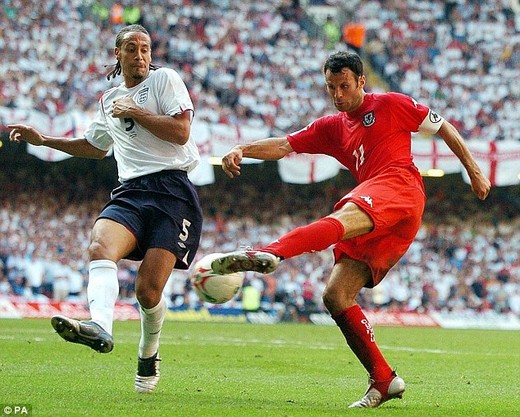 Skill: Giggs turns inside Rio Ferdinand during the World Cup qualifier at the Millennium Stadium in 2005

This time, the likes of John Hartson, Gary Speed and Robbie Savage were supplanted by a young Craig Bellamy. Giggs was advancing in years by the time that group were hitting their international maturity.

Unfortunately, in a play-off game for Euro 2004, Wales were again caught short, Russia eventually making the finals in Portugal. 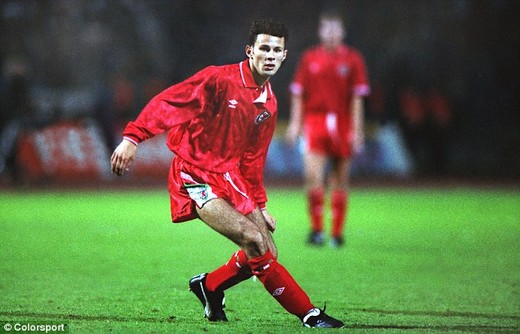 Fresh faced: Giggs was 17 when he made his senior debut for Wales against Germany 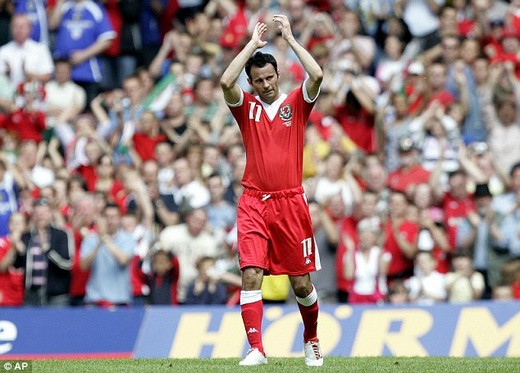 Time to say goodbye: Giggs leaves the field after winning his 64th and final cap for Wales 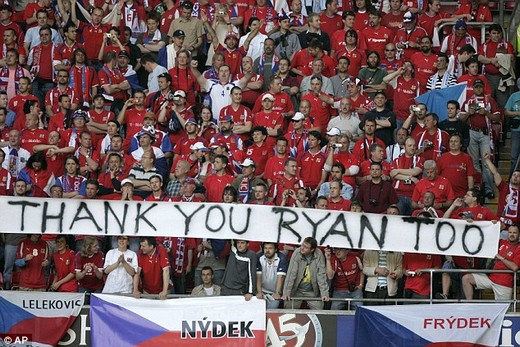 Global icon: Czech Republic fans hold a banner thanking Giggs during his final game for Wales against themGiggs was handed the captaincy in that same year. But his time was running out. Wales were out of the reckoning for the same tournament four years later.

He bowed out of international football in 2007, following a goalless draw against the Czech Republic in Cardiff.

If Giggs' was a stellar career, the only blemish is his failure to attend friendlies for that nine-year period.

Whenever he could turn up to play in qualification matches, he did.

However, had he been allowed to appear in non-competitive fixtures, given his injury record, it is likely he would have challenged Southall's record of 92, rather than the 64 caps and 12 goals he actually collected.

There can be no doubt that Giggs' contribution was significant. Yorath once said that he was his side's best winger but if he'd played him at right-back, that he would have excelled there, too.

Perhaps the Biblical saying in the chapter of Luke comes to mind: 'No prophet is recognised by his own people.'

Because by any other yardstick you care to mention, Ryan Giggs is a footballing great. And he certainly deserves his place among other greats of Welsh football.