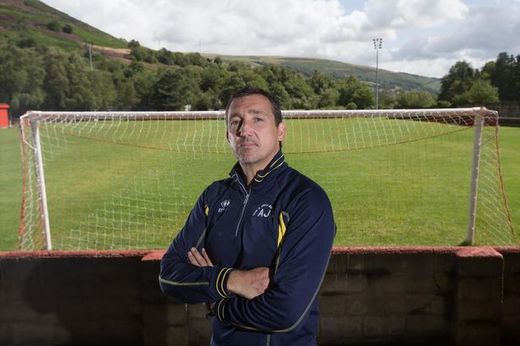 A junior  football volunteer credited with helping his club to survive has been honoured by Welsh football legend Ryan Giggs at the Football Association of Wales Community Awards.

Andy Jones, from Ton & Gelli Boys and Girls Football Club, picked up the prestigious People’s Award for Volunteer of the Year, winning a public vote between regional winners.

More than 1000 responses flooded into the People’s Award category with South Wales FA nominee Andy being crowned with the night’s biggest prize.

The 45-year-old, from Gelli, who is a gas fitter by day, is credited with helping the junior Rhondda club to survive and then thrive after coming close to extinction. He was described as a driving force behind rejuvenating the club when they looked like folding after the senior committee all retired – trying his hand at a number of roles including secretary and coach.

He has also volunteered as groundsman, caring for the pitch and marking out the white lines on match day. The club has recently received a £300,000 grant thanks to Andy’s hard work and the award recognises the tireless dedication he has shown to keep Ton &amp; Gelli Boys and Girls FC on the pitch.

The FAW Community Awards, which were presented at the Cardiff City Stadium ahead of the recent Euro 2016 qualifier against Cyprus, aim to recognise and celebrate those coaches, volunteers, clubs and leagues, across Wales who dedicate their time to grassroots football in their local community.

In his new role as McDonald’s Head of Welsh Football, Manchester United icon Ryan Giggs spoke with pride at being able to recognise the efforts of people such as Andy.

And Ryan, Britain’s most decorated footballer and now assistant manager to Louis van Gaal at Old Trafford, insisted the awards were the perfect way of ensuring the grassroots heroes in Wales get the plaudits they deserve.

“I’ve seen first hand what influence people working at the grassroots level can have,” said Ryan.

“I can remember starting playing at the age of 10 on a Sunday and a man named Dennis Schofield was our coach.

“He must be 83 or 84 now and he’s still going. He’s dedicated his life but he’s not alone, there’s so many people like him who give up their time and spend their lives wanting to help young kids enjoy football as much as they can.”

While Andy wasn’t actually at the FAW awards ceremony as it clashed with his daughter’s 21st birthday, he said he was honoured to receive the award and wanted to thank everyone who had voted for him.

“It’s people like them who can help create the next generation of stars but it’s not all about the players who come through and make it as a professional.

“I feel very privileged to have been recognised as the People’s Award winner at the FAW Community Awards, and would like to thank all the kind people who took the time to vote for me,” said the father-of-two.

“It’s a real honour for myself, but also for the club which been part of my for the last eight years. I am just one of many thousands of volunteers across Wales, who deserve to be recognised for their hard work at a grassroots level.”