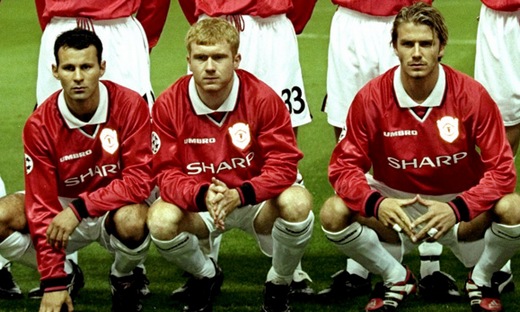 Paul Scholes is pleased Ryan Giggs will captain Team GB at the Olympics - but disappointed that another pal David Beckham has been excluded.

British coach Stuart Pearce selected Giggs and Tom Cleverley in his squad for this summer's tournament but caused a major stir by leaving out ex-Reds midfielder Beckham, despite including the LA Galaxy superstar in his original plans.

"From speaking to Ryan, I can tell he’s looking forward to it," explained Scholes to MUTV. "I hope they do well. I don’t see any reason why they won’t do as they’ve got a very good squad. Obviously there are other squads in it who want to win the gold medal but I’m sure Ryan will lead the team well and hopefully they’ll go a long way in the tournament.

"Ryan's been unfortunate as Wales didn't manage to qualify [for a World Cup or European Championship] whilst he was playing for them. So it’s a good chance for him to play in a big tournament. I just hope they can do well and go all the way and win it."

Another of Scholes' Class of '92 team-mates had also been expected to parade his talents in the competition but Beckham missed the cut when the 18-man squad was announced.

"It's a shame about Becks," said Scholes. "It's surprising as well, after everything David did to help London get the Olympics. That's Stuart Pearce's decision, but I feel sorry for David as I'm sure he'd have loved to have played in it."