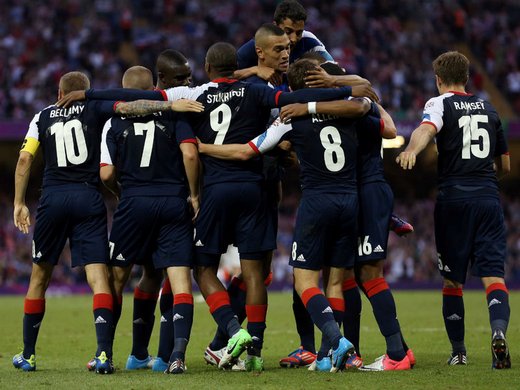 Great Britain's men's football team qualified for the quarter-finals of the Olympics after Daniel Sturridge's goal defeated Uruguay in Cardiff.

Stuart Pearce's men progressed to the knockout stages, where they will face South Korea on Saturday back at the Millennium Stadium, as winners of Group A.

Sturridge's tap-in came in first-half stoppage-time and was enough to secure the points which meant Team GB, who had been written off before the tournament, remained unbeaten in the competition.

Uruguay had been among the favourites for glory at the Games but a side featuring the likes of Luis Suarez and Edinson Cavani were eliminated as Senegal finished runners-up to Great Britain.

And Pearce's team admirably opted not to follow the lead of those discredited badminton players by trying to engineer a result that would keep them out of Brazil's way until the final.

Instead, should they come through the last-eight meeting with South Korea, they will face the hot favourites at Old Trafford next Tuesday.

Had Gaston Ramirez's injury-time effort not rattled the bar, they would have avoided that fate.

It is a shame too, because with Spain already out and Uruguay, who went into their game against Team GB knowing they could have progressed with a win, making their exit in bad-tempered fashion, Pearce's side would otherwise be a strong contender to reach the final at Wembley on 11th August.

Not that Pearce and his team should be criticised for that. Sturridge's goal was the least they deserved from yet another encouraging display, which maintained improvement from previous matches.

The Chelsea man has now scored two in two games, a fact the watching Roy Hodgson - whose England team take on Italy in a fortnight - cannot help but have noticed.

Given the geographical nature of this tournament, maybe it is impossible for the footballers to really feel part of Team GB.

There is no doubt though that over the past month, through a kitting-out session at Loughborough, a combined visit to the Olympic Village a week later, and then time spent in the North East around that double-header in Middlesbrough, a bond has been forged between the men's and women's teams.

It is impossible therefore to believe Stuart Pearce's squad have not been able to feed off the sensational performances of Hope Powell's women's team, culminating in that outstanding win over Brazil 24 hours ago which saw them also qualify for the knockout stages as group winners.

And they were eager to make it a case of whatever you can do, so can we.

And, with a Welsh crowd offering their unequivocal backing through a lusty rendition of God Save The Queen, Britain went about their task with relish.

As a draw was the actual requirement, it could not be described as a gung-ho attitude.

But at times, Britain's approach work was marvellous, with Aaron Ramsey in particular showing the kind of form that attracted Arsenal to him before a badly broken leg and subsequent loss of confidence turned some sections of the Gunners support against him.

It was Ramsey who flashed a first-half shot across goal, one of those that bisected the far post and the outstretched legs of Sturridge and Scott Sinclair.

The clock was ticking down towards the interval, though, when Allen wove a neat pattern inside the Uruguay box before drilling the low cross which Sturridge prodded home from close range.

Suarez ended the half throwing a piece of loose turf to the ground in disgust.

The South Americans, so fancied beforehand, had been a major disappointment and this was no exception.

Suarez was one of the major culprits too, which merely fuelled the boos that rang out before kick-off and every time the Liverpool man touched the ball afterwards.

His mood would not have improved 10 minutes after the restart when he created space for himself deep inside the Britain box, only to be foiled by the imposing figure of Jack Butland, the teenage goalkeeper who is having such an outstanding tournament.

The 19-year-old did even better when Uruguay attacked again, this time denying Suarez with a full-length fingertip save, Cavani helping him out by belting the rebound into the sidenetting.

When he was subsequently booked for handball, the cheers at least made a change.

The next time he heard them was to signal the end of Uruguay's interest in the competition.