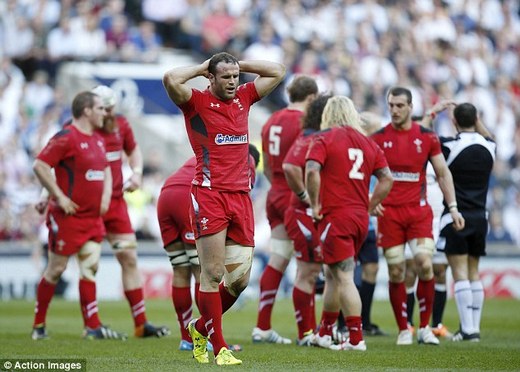 Wales centre Jamie Roberts has revealed that he was given advice from Welsh football legend Ryan Giggs after their Six Nations defeat to England at Twickenham.

The 29-18 defeat meant Wales slipped out of the championship running and Roberts knew after the game that his side hadn’t delivered as individuals and as a team.

But the despair that followed the final whistle was immediately interrupted when Giggs, who holds the Manchester United club appearance record and who has played 64 times for the national football team, walked into the dressing room to try and lift the players.

Roberts told the Independent: ‘After that initial dressing-room moment of despair, there was a bit of a boost when Ryan Giggs walked in straight after the game.

‘I was somewhat shell-shocked to get the chance to talk to him, an absolute legend of Welsh sport, and I think all the guys were pretty stunned that he knew each and every one of our names.

‘I spoke to him about various things - about how Manchester United’s season is going right now, which is not where he or they would want it to be.

‘There’s a parallel to us I guess, and he spoke about how you recover from those lows.

'He’s had so many highs in his career but there have been those low moments, those defeats too.’