Giggs was my inspiration in quest for international call, says Jarvis 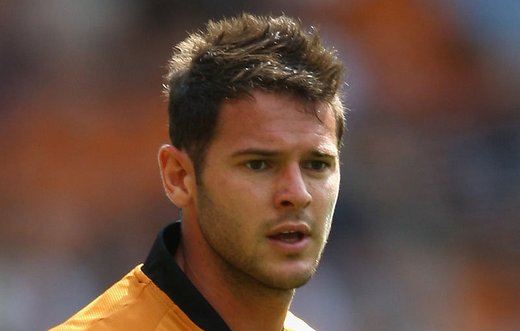 If Matt Jarvis makes his England debut against Wales on Saturday, the Wolverhampton winger knows who to credit with giving him the inspiration to dream of reaching the international stage. It is not an Englishman, however, but a Welshman: Ryan Giggs.

Jarvis grew up as a Manchester United fan in Guildford, Surrey, and hoped one day to emulate his hero. "Giggs played in the same position and was jinking in and out and making great crosses," Jarvis said. "Obviously he has developed his game now, but that was what I was looking at when I was growing up."

The midfielder, who is in the England squad for the first time, yesterday described his 2003 rejection by Millwall at the age of 16 as an "incentive" that has ultimately led to his selection for the forthcoming games against Wales and Ghana.

"There were a couple of players in my position in the age above and they'd signed pro. So they just unfortunately didn't let me get a contract," Jarvis recalled. "I think there was a few people in there. I went in with my dad and obviously didn't say too much. Once I got my head around it I used it as an incentive.

"Millwall was gutting, I suppose. I had a point where I was thinking, 'What should I do, should I carry on with this?' As soon as I was thinking that then everyone was telling me that I should and from there I went straight to Gillingham. And funnily enough I've played Millwall quite a lot and managed to get on the scoresheet a few times, which was a nice feeling."

Millwall, Gillingham, Wolves and now England – Jarvis has taken an unfamiliar route to Fabio Capello's squad, but deserves the call-up for his dynamic performances on the left flank for Wolves this season.

Son of two former England table tennis internationals, the 24-year-old has blossomed after moving to Wolves in 2007 and has scored five goals this season. Jarvis said: "I've always played on the left since growing up. I've had to improve my left foot a lot and hopefully I'm still improving it and I can use it to put in some good balls.

"Mick McCarthy [the Wolves manager] has been a massive influence. He took me to Wolves and I've been working every day with him and his staff.

"He has been telling me different things he thinks I should improve on and he has given me confidence," he said. "I'll be ecstatic if I can get on the pitch in either game and get a cap, it will be fantastic."