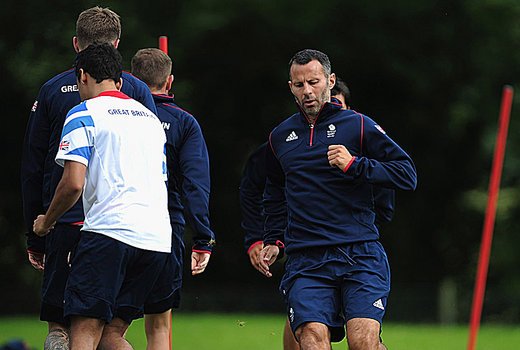 Ryan Giggs is relishing the opportunity to play in a major international tournament when he captains Team GB in the London Olympics.

The 38-year-old has won a record 13 league titles and numerous other trophies during his Manchester United career, however has experienced the opposite end of the scale during international duty for Wales.

Now the winger will have the chance to skipper Team GB, who open their campaign in the familiar surroundings of Old Trafford when they take on Senegal on July 26, and Giggs is enjoying every minute of the preparation.

"My career for my country has obviously been the total opposite to the one for my club," said the Red Devil veteran.

"I've been so successful with United but not so with Wales.

"I would always watch the other lads, especially those ones I grew up with, go away on international tournaments and wish that I could do the same.

"Unfortunately I never got the chance.

"I would always watch the other lads, especially those ones I grew up with, go away on international tournaments and wish that I could do the same."
Ryan Giggs

"But now I have even in the first few days together I've seen things that I haven't seen in my career.

"It's been an eye opener, and really enjoyable as well."

Giggs, who has announced he would like a coaching role once he hangs up his boots, insists victory would rank alongside anything he has won before.

"I don't like to prioritise medals because every single one means something special.

"But of course, this would be different because you never thought you'd be competing in an Olympics. To win a gold medal would be special."