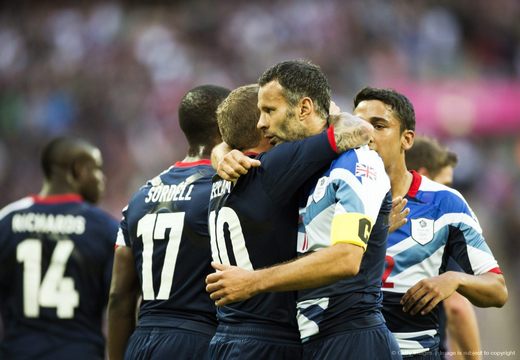 Ryan Giggs has insisted Team GB’s Wales internationals are committed to the side despite not singing the national anthem before games.

The Manchester United midfielder captains Stuart Pearce’s side and, together with fellow Welshmen Craig Bellamy and Joe Allen, caused controversy by not singing God Save the Queen ahead of Thursday’s 1-1 draw against Senegal.

The trio were silent again on Sunday against United Arab Emirates, but following the match Giggs sought to play down the row.

He told reporters: "It's a personal thing. The British anthem is the same for a Welshman, Scotsman or an Englishman. It's difficult but it's not an issue for us.

"It might be for other people but, once the game starts, we're all pulling in the same direction and I think that's the main thing."

Team GB’s third and final group match against Uruguay will take place on Wednesday at the Millennium Stadium in Cardiff, and the 38-year-old warned that the national anthem may not be viewed favourably by a majority Welsh crowd.

Giggs added: "The national anthem may not be so warmly received in the Welsh capital. I hope it won't get booed and I hope the fans will get behind us as they have in our first two games.

"It will mean a lot to all of the Welsh lads to play in our own stadium, our own back yard so it will be a great occasion."

Giggs became the oldest ever Olympic scorer at 38 years and 243 days on Sunday, and although UAE equalised, Scott Sinclair and Daniel Sturridge came off the bench to complete a 3-1 win.

The victory sees Team GB top Group A on goals scored ahead of Senegal who unexpectedly defeated Uruguay, and Giggs reflected: "It was a very important win.

"Especially after the Senegal result, and the pressure was on. I'm still disappointed not to play in a World Cup, a Euros or a major tournament and now this is something I'm relishing."