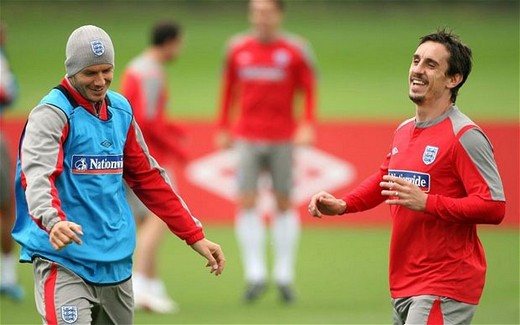 Neville won every major club honour as a player and has impressed as a Sky Sports pundit over the past year, but will take on a new challenge with England this summer at the European Championships 2012 as the surprise inclusion in Roy Hodgson’s new coaching team.

“He’s got fresh ideas,” Giggs said. “He’s just come out of playing football himself, played at the top level, going to international tournaments.

"While he was at those tournaments maybe he thinks things should have been done differently.

“I think that he would have been a success whatever he had done because he’s that sort of person, he’s a force of nature.

"He’s driven, very ambitious and he’s very good at what he does, whether it be playing or on the TV. I’m sure he’ll be a success at England.”

Giggs was named on Tuesday as the greatest player in the 20 years of the Premier League, with Sir Alex Ferguson, his Manchester United manager, receiving the managerial award.

Ferguson did not receive his award in person but David Gill, United’s chief executive, said that he expected him to continue as the club’s manager for “many more years”.

Giggs named Paul Scholes as “easily” the best player he had ever lined up alongside, ranking the former England midfielder in the same bracket as Barcelona legend Xavi.

“I think actually it’s probably been the best he’s ever played [this season],” Giggs said.

“He just doesn’t give the ball away, he controls the tempo of games. In training and in games you find yourself laughing because he makes it look so easy.

"He’s easily the best player I’ve played with because of that fact, because he makes it look so easy.

“Him and Xavi are the same sort of players. They just control the tempo of great teams.

"To do that you need to be a special player. In any team in any tournament he would shine.”

Asked if had spoken to Scholes about the prospect of playing in this summer’s European Championship for England, Giggs said: “No. I wouldn’t be holding my breath either, but he’s the kind of player you’d want in your team.”