Giggs: Anfield was the toughest place to visit 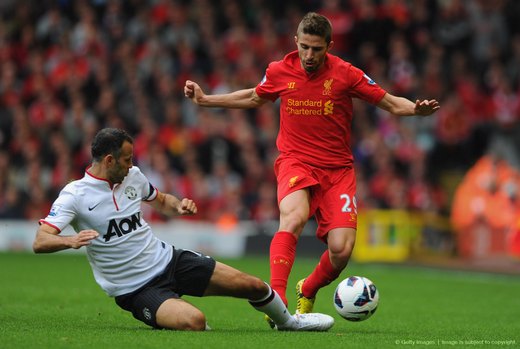 On Tuesday night attendances at Barclays Premier League matches broke the 250 million barrier. To commemorate this milestone, premierleague.com invited its Twitter followers to ask a question of Ryan Giggs, the only player still playing in the Barclays Premier League who also featured when the first fans filed through the turnstiles for the competition's inaugural matchday on Saturday 15 August 1992.

@DalisoC: Which trophy are you most proud of winning?

Ryan Giggs: I think the trophy I am most proud of is probably the first Premiership [1992/93]. Growing up as a United fan and obviously not winning it for so long, for me, coming so close the year before and losing out to Leeds was really disappointing so when we did eventually win it, the excitement and the relief and the pressure was off a little bit. It was probably the foundation to go on and win many things so I would probably rank that as my favourite.

@shanekels: Which three players from the Premier League era would you have with you in your midfield?

Giggs: I think the two midfielders that stand out are [Paul Scholes] Scholesy and [Roy Keane] Keaney, the year we won the treble. And then it would be close to [David Beckham] Becks and Cristiano [Ronaldo] but what Cristiano has done in the last couple of years probably just pips him. In my view, along with [Lionel] Messi, he’s the world’s best player. So, I wouldn’t mind being in that midfield, if I can get in!

@Ali_Alex_MUFC: If you could go back to any of your previous seasons, which one would it be and why?

Giggs: I think the treble-winning season. It was just such a rollercoaster season and [we had] three cup finals in 10 days; obviously winning the league first of all, then the FA Cup and going on to win the Champions League in the manner that we did. It was just like the season really. Those 10 days were like a rollercoaster, so that was probably the feeling and feat that you don’t often get.

@SiHanTheGooner: Which team do you always look forward to playing the most?

Giggs: I think as a player you want a challenge, so any of the top teams really. I would probably say Liverpool, because there is always such a great build-up. It doesn't matter how the teams are doing in the league, there's always that rivalry and there’s always that ferocious tempo within the game, whether it be at Old Trafford or Anfield.

@amatan: In your opinion, what was your best game in the #BPL?

Giggs: I’m struggling with that one! I think I would have to say the City game, the 4-3 [against Manchester City in September 2009]. I set up a few goals and – the way the game went, obviously passing to Michael [Owen] to score the winner – that was a great game.

@Minion786: How does it feel to be playing alongside the youth players knowing you were starting for Man United before they could walk?

Giggs: [Laughs] I got used to the fact a long time ago that I am playing with someone who wasn’t born when I made my debut and all these sort of things that come up. So, yeah, I have just got used to it. It’s something I have got to live with, I suppose.

@Nookums69: What is your favourite goal that you did not score?

(After being asked if he’s tried to emulate either goal) It wasn’t the same as Becks’s but at Charlton away I hit the crossbar [in December 2000]. So I nearly scored from the halfway line but Wayne’s, no, I haven’t come close!

@deba1993: Which stadium has the most daunting atmosphere?

Giggs: I think Anfield. Like I said before, no matter how the teams are doing there is always a great atmosphere. You could be playing against an average Liverpool team and it would still be one of the toughest games of the season, just because the crowd drive them on and the tradition between the two clubs.

@maestrofmhell: Who is the one defender who gave you nightmares?