Gary Neville: Pearce was right to left out Beckham 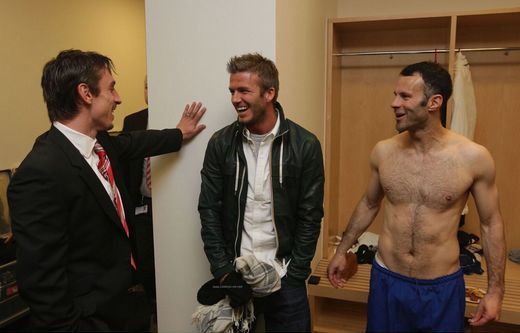 Becks was tipped to skipper the football team on the back of his role in helping bring the Games to London.

But instead the ex-Manchester United star was left devastated when Team GB coach Pearce went for Ryan Giggs, Craig Bellamy and Micah Richards as his three over-age players.

But the former right-back insisted neither sentiment nor celebrity could sway the decision. He said: “We’re talking about Stuart Pearce and David Beckham, two brilliant pros, who wouldn’t look at anything other than football reasons.

“I’ve spoken to David and he’s disappointed. He wanted to be part of it. It was a dream of his. This would have been a great occasion for him.

“I’m disappointed for him as a friend, but professionally I can understand that there are difficult decisions to be made. We live in a man’s world. You have to front up when you get disappointments.”

Neville, speaking at Old Trafford where Team GB kick off their gold-medal chase next Thursday against Senegal, still has one old United team-mate to follow at the Games.

He will be in Cardiff to see GB skipper Giggs in action against Uruguay on August 1.

And he said: “He’s an absolutely brilliant player who I’m sure will light up these Olympics. But he’ll only think it’s a great moment if GB win.”

Neville is urging fans to book their park-and-ride spots.Tickets are still available for Old Trafford, Cardiff and Wembley.

But Neville warned: “It won’t be like normal matchdays, you must pre-book your travel or you might miss the action.”