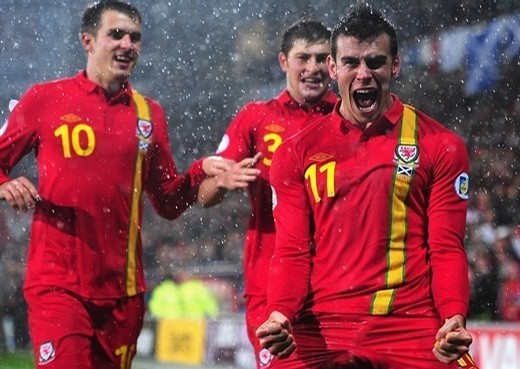 CHRIS COLEMAN is urging Gareth Bale to write his name into Wales folklore — by becoming one of his country’s all-time greats.

The likes of John Charles, Ryan Giggs, Ian Rush and Neville Southall are considered the best players ever to wear the famous red shirt.

But Bale produced a stunning all-round display and two goals to almost single-handedly shoot down Scotland on Friday night.

And the Dragons national team boss is convinced his star man will become a Wales legend while making his mark on the world stage in the next few years.

Coleman said: “In this country we talk about the great John Charles, Ryan Giggs, Ian Rush. Southall was the best goalkeeper in the world.

“But there’s no doubt in my mind he will be up there with those guys.

“I have not seen many better performances by a Wales player than that — and that’s apart from his two goals. As a manager you admire players from afar and you know someone is a good player but it is not until you work with them when you find out exactly how good they are.

“I knew he was good but against Scotland he was a different class. The goals capped off a brilliant performance.”

Wales looked to be heading for their fifth straight defeat under Coleman until wide man Bale won and scored an 81st-minute penalty.

And then his stunning winner two minutes from time broke Scots hearts and finally eased the pressure on the Wales boss.

That took Bale’s tally to an astonishing six in his last seven matches for his country.

And the Tottenham star’s performance in Cardiff is likely to make Europe’s top clubs sit up and take notice again.

Two years ago, when he was starring for former boss Harry Redknapp’s Spurs in the Champions League, the likes of Real Madrid and Barcelona were being linked with him.

And Coleman reckons his superstar would not be out of place if he did land a move to one of the European giants.

He said: “Gareth’s a quiet lad. You would never think he is one of the most dangerous left-sided attacker on the planet, but he is.

“And he wouldn’t be fazed by moving. He loves playing football, that’s when he smiles. He has the character to handle that.

“It’s not easy moving to another country, another culture. It’s a tough ask. But he’s young and has it all in front of him.

“He’s a totally level-headed lad who is completely unaffected by it all so there are no concerns about getting big-headed.”

Joe Allen believes his Wales team-mate is capable of challenging the likes of Lionel Messi and Cristiano Ronaldo if he turns in more performances like he did against the Scots.

Liverpool midfielder Allen said: “I’m going to be biased, but he’s up there with some of the best players in the world.

“The second goal is the kind of thing he is capable of with the quality and the talent he possesses.

“Everyone knows that Messi and Ronaldo are out in front at the moment.

“But if Gareth keeps performing like that week-in, week-out which nine times out of 10 he does, then who knows how far he can go.”

Wales must quickly get back down to earth after Friday’s dramatic win and prepare for the trip to Croatia on Tuesday.

Defeat in Osiek would leave the Welsh seven points behind the Croatians in Group A and be a huge blow to their chances of reaching the World Cup finals in Rio in 2014.

Coleman is refusing to give up on the dream. He said: “Let’s see after Croatia. There are still seven games and 21 points up for grabs so anything can happen.

“This is a great result but come Saturday morning I won’t be patting myself on the back and celebrating this win, I’ll be planning for Croatia.

“We need to show the same spirit and character as we did against Scotland and be a lot better than the last time we were away from home.

“We have to be a lot harder to beat. Show the same commitment, desire and bravery. If we do that we will come away with something.

“We have shown real character in two of the three games given that we played most of the game against Belgium with 10 men.”