They’re all old friends, but David Beckham led the way at The Class of '92 premiere on Sunday evening.

The former Real Madrid star's wife Victoria and his three sons Brooklyn, Cruz and Romeo supported him as he walked down the red carpet in London. 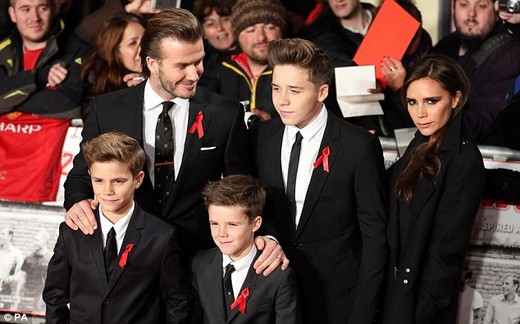 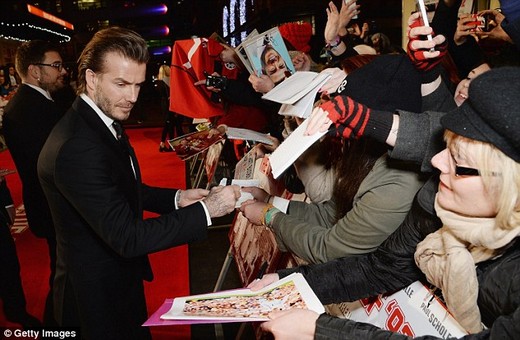 In demand: Beckham signs autographs for fans ahead of the premiere 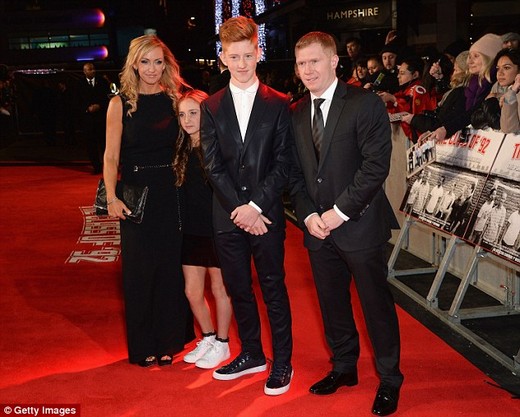 Ginger genius: Scholes (right) and his family arrive to see the movie 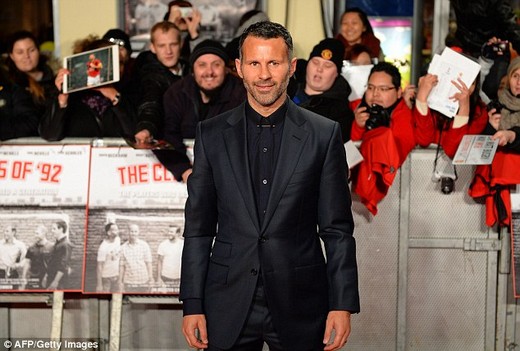 Man of the moment: Giggs poses for the cameras just two days after celebrating his 40th birthday 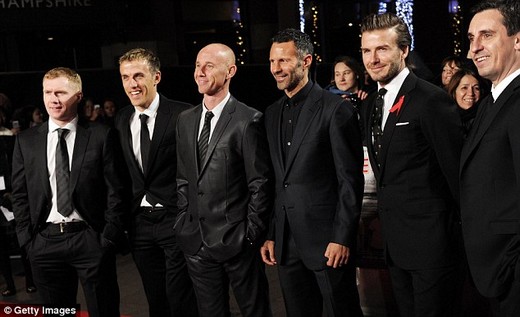 Together again: The Class of '92 tells the story of Beckham, Butt, Scholes, Giggs and the Neville brothers at Manchester United

Beckham, who retired from football earlier this year, looked every inch the Hollywood superstar as he arrived in a dapper black suit with a crisp white shirt.

The ex-England midfielder, who recently moved his family to London from Los Angeles, walked down the red carpet he greeted fans and spent time signing autographs for the youngsters who lined the event.

The 38-year-old sporting hero began his illustrious professional career with United when he made his first-team debut in 1992, aged just 17 years old. 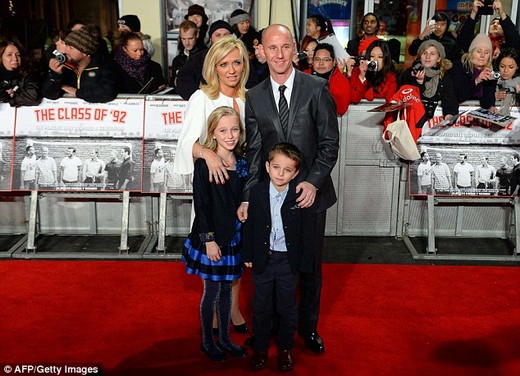 Back on the scene: Former United midfielder Butt and his young family arrive in plenty of time 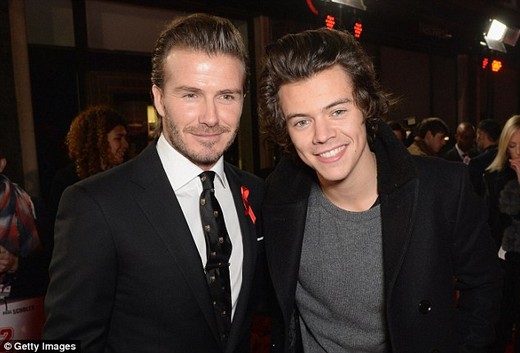 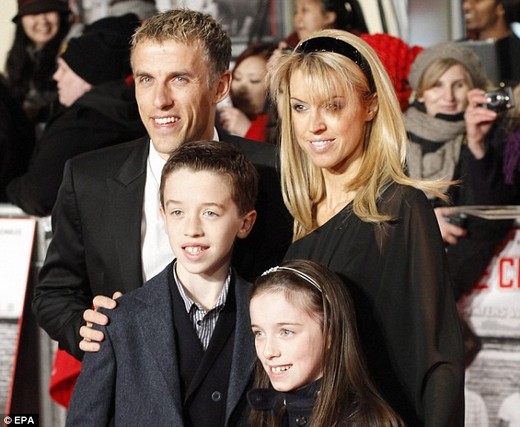 All smiles: Phil Neville, wife Julie and children Harvey and Isabella look happy to be in attendance 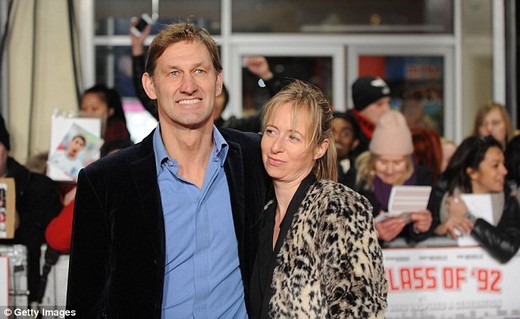 Over twenty years later Beckham has played for some of the most famous teams in the world and gone on to achieve world-wide fame with his wife Victoria and their young family.

Many of David's former team mates brought their family along including Nicky Butt and Paul Scholes.

Phil Neville, one of the six footballers that the movie concentrates on, also brought his wife and children to the red carpet event.

It was a special evening for United fans who got to see their heroes all in one place again. 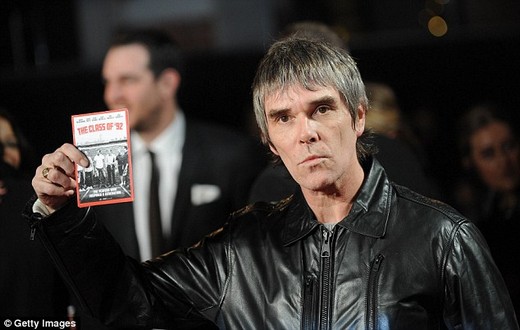 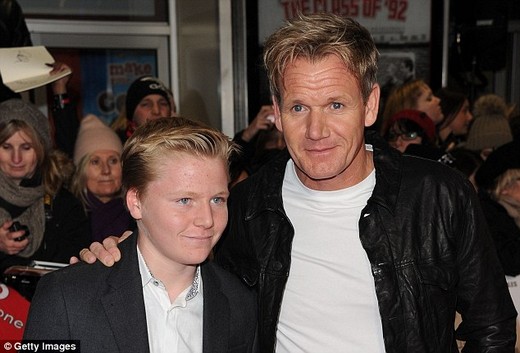 Family affair: Celebrity chef Gordon Ramsey (right) and his son Jack (left) were both in the capital to watch the film 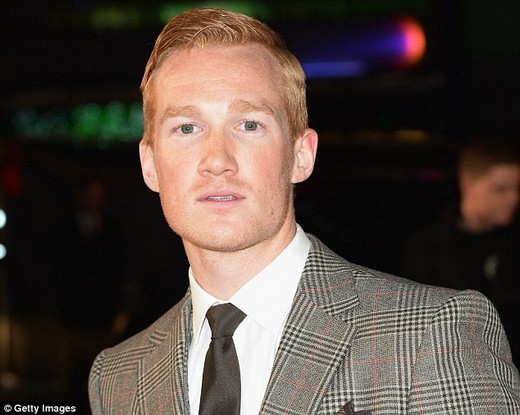 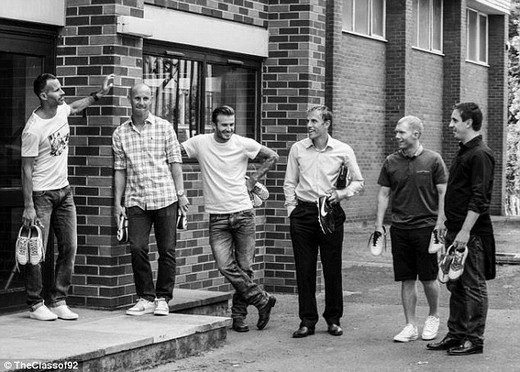 Open and honest: Giggs recalls how Sir Alex Ferguson came round to Lee Sharpe's house ahead of a players' night out in the film

Many fans wore their famous red and brought football shirts along for the players to sign.

Harry looked like he was having fun hanging out with the main man himself, Beckham - even posing for a picture together.

Radio 1 show host Nick Grimshaw arrived after an afternoon at the Primrose Hill Christmas Market with his father Pater Grimshaw.

The Class of '92 charts the extraordinary rise of the six now-legendary players, who rose up through the ranks of Manchester United's Youth Team to global stardom.

Covering the period of 1992 to 1999, the Ben and Gabe Turner-directed movie culminates in Manchester United's Champions League triumph in 1999 to round off the treble winning season.

WHAT BECAME OF THE LIKELY LADS?

Ryan Giggs
The 40-year-old was the first of Fergie’s Fledglings. and became the most decorated player in the history of Premier League.
The Welshman holds a record 13 Premier League winner medals as well as two Champions League medals. He has just signed a new one-year contract and joined the United coaching staff.
David Beckham
Twice runner up for FIFA World Player of the Year, Beckham announced his retirement aged 38 in the summer after helping PSG win the French title.
He also played for Real Madrid, AC Milan and LA Galaxy.
Becks graced the famous No 7 jersey of Manchester United and he is still a favourite at Old Trafford after refusing to play for another Premier League club despite several offers.
Paul Scholes
Scholes claimed 11 Premier League medals and his vision and excellence ensured he is widely regarded as one of the best midfielders the world has ever seen.
Scholes came back from retirement to bolster the United midfield after the club had been hit by injury and loss of form He has made 700 appearances for the club, the third highest in their history.
Gary Neville
The former United skipper won a total of eight Premier League titles. He formed a partnership with Beckham on the right wing and made 85 appearances for England. Since retiring, Gary has forged a successful media career as a pundit for Sky Sports and columnist for the Mail on Sunday.
Phil Neville
The younger of the Neville brothers was also a crucial part of the class of 1992, but was unable to establish himself as a first choice left-back until 2000 due to the consistency of Denis Irwin. In 2005, Phil joined Everton and was soon handed the captain's armband. Returned to United as first-team coach.
Nicky Butt
Butt ended his career in 2011 at South China, a club in Hong Kong. Butt, now a reserve team coach at Manchester United, was a midfielder and spent 12 years at Old Trafford before sealing a move to Newcastle United in 2004.