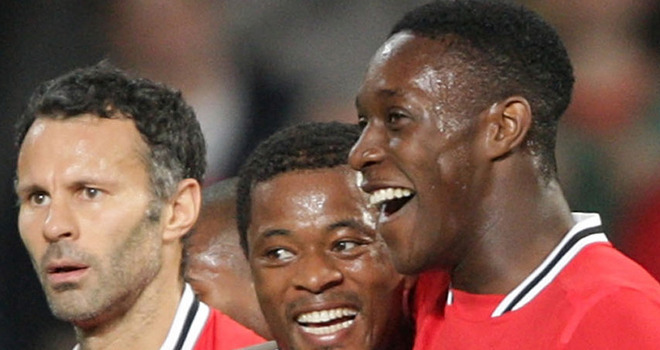 In-form striker Danny Welbeck is eager to continue to learn from "world-class" Manchester United team-mates which include Ryan Giggs and Wayne Rooney.

The 20-year-old has burst out of the blocks both in the league and in Europe since returning to the Red Devils following a successful loan spell at Sunderland last season.

With Welbeck having to compete with the likes of Rooney, Javier Hernandez, Dimitar Berbatov, Michael Owen, Federico Macheda to be Sir Alex Ferguson's first-choice forward, the youngster's form so far this term has done him no harm - so much so, it has also led to the former academy ace being thrust into Fabio Capello's plans for England.

But Welbeck still believes he has a lot to learn and cannot think of anywhere better to do it other than at Old Trafford with elite mentoring from the likes of "role model" Giggs and strike partner Rooney.

"My role model has been Ryan Giggs ever since I was a young kid. I love the way he plays. I was eight when he scored that goal against Arsenal [in the 1999 FA Cup semi-final]," he told the Daily Telegraph.

"I just thought 'Wow! I want to be Ryan Giggs'.

"When I first trained with him, I was in disbelief. Then I got the chance to play with him. There's nothing better than playing alongside your role models.

"Ryan Giggs has that great desire. He still wants to win every single training match. Even if it's possession, he wants his team to have the ball most. To see that is really encouraging for the young players to know how much it still means to them.

"Every United player just wants to get better and better. Wazza [Wayne Rooney] has a great desire. It's infectious. I see him giving his all and it makes me want to give my all as well. He's a wonderful talent.

Welbeck, who has been ruled out of Saturday's clash with Swansea by Ferguson because of a muscle injury that also kept him out of England's match versus Sweden in midweek, also wants to emulate the type of top-flight career enjoyed by Michael Owen.

"I can't stop learning off him. I watch how he hangs on the shoulder of the last defender. I watch his movement in behind defenders. He's a great striker," said Welbeck, who has been part of United's academy since the age of eight.

"I remember his goal against Argentina at France '98. I was sitting in the living room with my whole family and saw him take that touch with the outside of his foot and just go. He shifted it past a couple of defenders and stuck it in the top corner and just, wow!"

Welbeck is also relishing the challenge of pushing his way into Capello's final selection for Euro 2012 with team-mates Phil Jones and Chris Smalling also vying for spots in the Italian's 'new generation' of youthful players.

"It's exciting and encouraging to know that if you're doing well with your club, the manager has you in his thoughts to pick for the full England side," he said.

"A few of us went to the Under-21 Championships last summer, we all know each other's games and hopefully we can take that into the Euros."