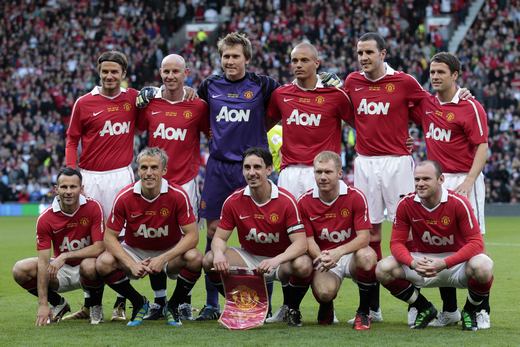 Gary Neville made an emotional return to the Old Trafford turf as his testimonial match revived fond memories of the Class of '92.

David Beckham, Ryan Giggs, Nicky Butt and Paul Scholes - as well as Gary's younger brother Phil - all joined the former United captain on the park, and there was also a familiar face in the opposition ranks as Italy legend Alessandro Del Piero skippered the visitors Juventus. And while the Italians slightly pooped the party by winning 2-1, after Wayne Rooney had opened the scoring for the Reds, this was still a night to remember for Neville and the thousands of fans who turned out to salute him.

Great cheers – not to mention a female scream or two from South Stand – greeted every early touch from David Beckham, including a trademark flighted ball that sent his old team-mate and best man scurrying down the right flank. Gary Neville showed his recent return to the training pitch had paid off as he caught up with the pass, only to be ushered off the ball by Juventus left-back Paolo De Ceglie.

Gary’s brother Phil is still playing top-flight football of course, and it was the Everton skipper who laid on the first chance for Wayne Rooney in the 4th minute, pulling the ball back from the left for United’s number 10 to force Marco Storari’s first save. At the opposite end, Tomasz Kuszczak was almost caught out of position after trading passes with his defenders but the Pole recovered well to block a drive from Alberto Aquilani, who last faced United when languishing in Liverpool’s reserve team.

The Old Trafford faithful were merciful to Aquilani – or perhaps blissfully ignorant, given his low-key start on Merseyside; instead of jeering him, the United fans saved their voices for warm approval whenever Scholes, Giggs or Beckham turned on the exhibition stuff.

The volume went up a notch in the 18th minute when Rooney fired past Storari from six yards. The move that created it might have had England fans wondering what might have been – with former international colleagues Rooney, Owen and Scholes all involved and then the odd man out, Ryan Giggs, an ex-England schoolboy, sliding an appetising assist in from the left wing.

TV replays suggested Gary Neville was beginning to feel the pace on his big night, after his clearing header was returned with interest by Aquilani’s right boot, only for Kusczak to save again and gather at the second attempt as Del Piero closed in. Neville found another gear though and delivered a classic right-wing cross that Owen almost buried with a diving header.

With another European clash looming large on the horizon, Sir Alex made his first changes on the half-hour mark – understandably withdrawing Rooney, Giggs and Scholes and sending on Bebe, Gabriel Obertan and Darron Gibson in their places.

A lull in the atmosphere and tempo ensued and Juventus took advantage to sneak an equaliser when Simone Pepe converted Milos Krasic's right-wing cross with a powerful header. The Reds could have regained the lead just before the break when Neville and Bebe combined to tee up Owen, but the man who scored United's final league goal of 2010/11 on Sunday couldn't keep his shot down this time. Beckham went closer, bending a shot from distance that Storari had to dive full-length for and push away to his right.

The match was, of course, all about one retiring Red but thoughts turned to another when Sir Alex made his next switch at half-time – replacing one of Edwin van der Sar’s final-season deputies Tomasz Kuszcak with another, Anders Lindegaard.

The Dane might have had a busier shift had Phil Neville not marshalled Milos Krasic well on Juventus’ right flank. Instead, Lindegaard had to be largely content with plucking crosses out of the air. His opposite number for the second period, former Arsenal goalkeeper Alex Manninger, had more to do and he might have been beaten when Beckham’s arcing cross found Bebe unmarked in the box – instead the Portuguese forward nodded wide.

Bebe did better with the ball at his feet, a surging run at the heart of Juventus’ defence drawing a foul and paving the way for a crowd-pleasing moment – a David Beckham direct free-kick. As camera flashes illuminated the Stretford End, the former United midfielder curled the deadball just over the bar.

Beckham would have been proud of the setpiece that put Juventus 2-1 up at the other end in the 78th minute – Manuel Giandonato curling a peach of a free-kick in off the far post, from a position on the left wing.

Sir Alex made seven substitutions in total, the last one receiving the most attention as Gary Neville bowed out to a standing ovation from all four sides of the stadium with five minutes remaining. It was a fitting and fond farewell to one of the club's most faithful servants - and no doubt the ultra-competitive former captain was just sorry he couldn't steer the Reds to one last victory.