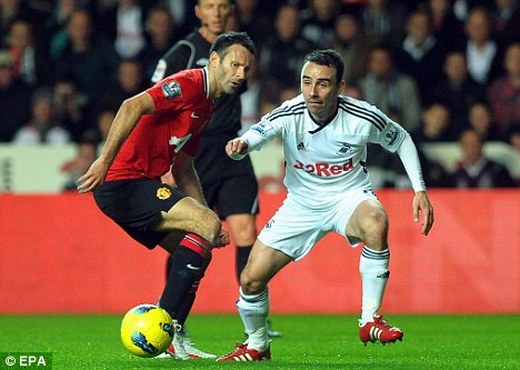 Sir Alex Ferguson has set the scene for a potential club versus country Olympics row after declaring his belief that young Manchester United players should not be selected for both London 2012 and the European Championships.

The Football Association's stated position is that they do not want to box themselves in regarding the make-up of Stuart Pearce's squad.

Whilst no firm selection plans are in place as yet - although David Beckham has been touted as skipper - it has been suggested players who are selected for Euro 2012 but play no meaningful part could be included in the Great Britain squad.

It would be a difficult stance for the FA to enforce given clubs could block selection, after Barcelona won a similar case involving Lionel Messi prior to the Beijing Games four years ago.

And clearly, they will get no support from Ferguson, who has already stated his concern that Wayne Rooney - presently subject to a three-game suspension - may not play at Euro 2012, whilst a group of young United players may make Fabio Capello's squad for Poland and Ukraine without actually being an integral part of the Italian's team.

'I wouldn't like to see our young players who might be involved in Euro 2012 then being selected for the Olympics,' Ferguson told United Review.

'Manchester United might well have a direct interest in this with our up-and-coming youngsters like Danny Welbeck, Phil Jones, Chris Smalling and Tom Cleverley now on the international scene.

'I welcome their involvement at international level but if they go to the Euro finals they will need a break. I know they are young, fit and eager, but they will need to rest.

'I am sure Stuart Pearce will bear this in mind. I certainly hope so because I wouldn't like to see them burnt out before they have really started.'

As a Scot, Ferguson has some obvious concerns about the overall nature of Pearce's squad.

However, in acknowledging how Ryan Giggs might deserve the chance to feature in a major international tournament in the latter days of his career, the Manchester United boss accepts it is a tough call.

'Speaking as a Scot I would say it is a no-no for us in case FIFA seizes the opportunity to try to make the home countries play together as Great Britain all the time, and we wouldn't want that,' he said.

'Having said that, Stuart Pearce made sense when he pointed out that a player like Ryan Giggs, who has missed out on playing in the major international tournaments with Wales, might welcome the opportunity to play in the Olympics as one of the over-age players.

'It might well appeal, and at the end of the day I suppose it is probably best left to individual choice.'