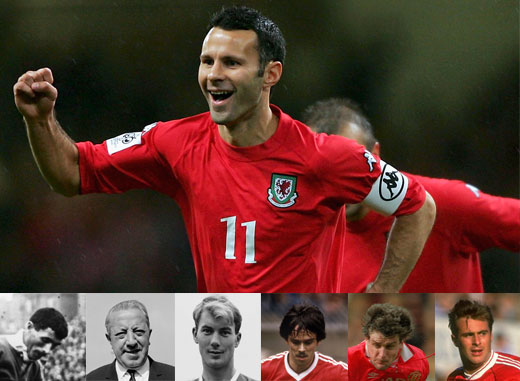 From Old Trafford’s first superstar to the club's record appearance-maker and current assistant manager, Manchester United’s rich history owes much to Wales. On St David's Day, we chart several markers on the intertwined paths of Red Devils and Red Dragons…

United’s first superstar: One can trace the rise of Manchester United back to the arrival in 1905 of Billy Meredith. Hailing from Chirk, the bandy-legged, whippet-thin, toothpick-chewing winger was snatched from Manchester City by boss Ernest Mangnall after he’d been handed a two-year suspension following allegations of bribery and illegal payments. Both inspired and inspiring, Meredith more than any man helped realise United’s vaulting ambition; the missing piece in the puzzle. His wing wizardry was a leading force in 1908’s First Division title win and the following year’s FA Cup success. Even at 37, he was potent enough to steer the side to a second title in 1911. Remarkably, he played on after the First World War, returning to City before finally hanging up his boots in 1924, the year of his 50th birthday. 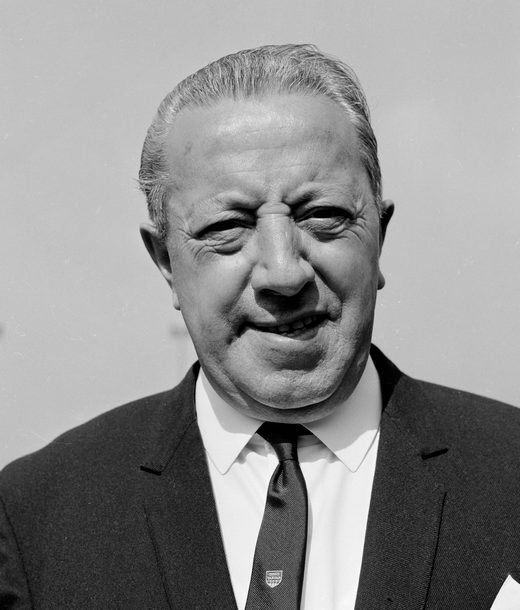 Jimmy Murphy, who was crucial for United in the post-Munich era.

Dream maker: Inestimable as right-hand man and sounding board for Matt Busby, the football-mad Jimmy Murphy forever has a place in Red affections for his stoic work helping the club off its knees in those dark post-Munich days. A brilliant coach and motivator during his 25-year association with the club from 1946 to 1971, he was also Wales’ most successful boss, with his team only losing to a Pelé goal and Brazil in the 1958 World Cup quarter-finals, just a handful of harrowing months after the Munich air crash - a trip he missed as he’d been away overseeing his national side. 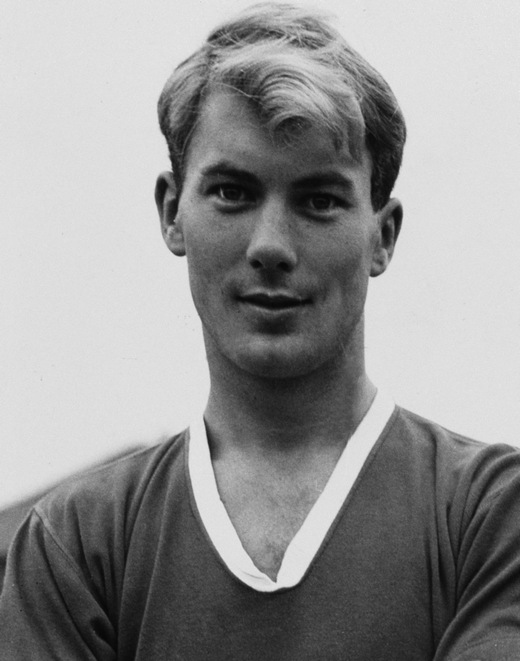 Kenny Morgans, a clever winger who was also one of the Busby Babes.

The Babe who became a Swan: Adept on either flank, Kenny Morgans was the Swansea lad who made good as a tricky winger for Busby’s Babes. Morgans made his United debut on the right flank in December of the 1957/58 campaign, keeping his place for the star-crossed trip to Munich two months later. Pulled unconscious from under the plane’s wheel, he was playing again by April, but struggled, understandably, to regain his poise and returned to Wales, where he played 54 times for Swansea between 1961 and 1964 before joining Newport County. He died in November 2012, aged 73. 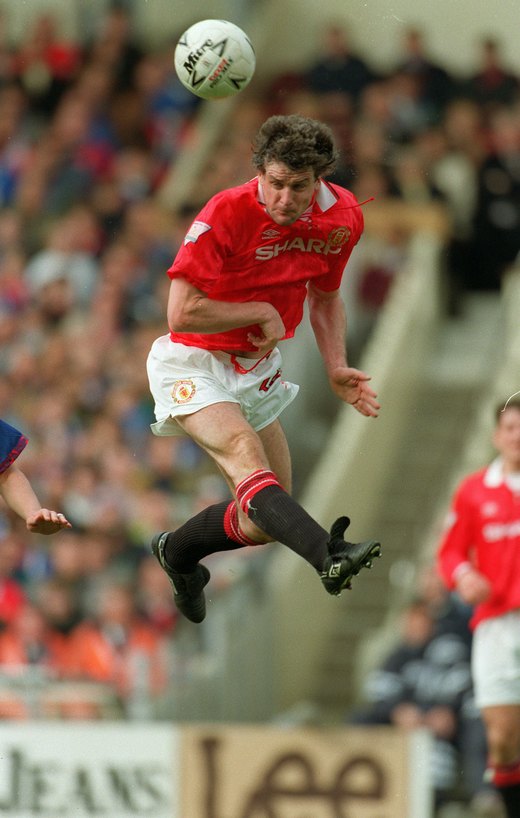 Bright Spark: There were few more terrifying sights for opposing goalkeepers and defenders than Mark Hughes in full flow. Blessed with Herculean upper-body strength and thighs like oak trees, ‘Sparky’, from Ruabon, near Wrexham, epitomised the blood-and-thunder-approach of United in the early 90s after returning from an unhappy spell in Barcelona - he'd been sold to the Catalan club against his will in 1986. His second spell was spectacular as he won two PFA Player of the Year awards, two Premier League titles, three FA Cups, one League Cup, and the 1991 European Cup Winners’ Cup and Super Cup. Chief exhibits among his outstanding strikes include a brace against Barcelona in the 1991 European Cup Winners’ Cup final and the volley just 40 seconds from an FA Cup semi-final exit to Oldham in 1994. 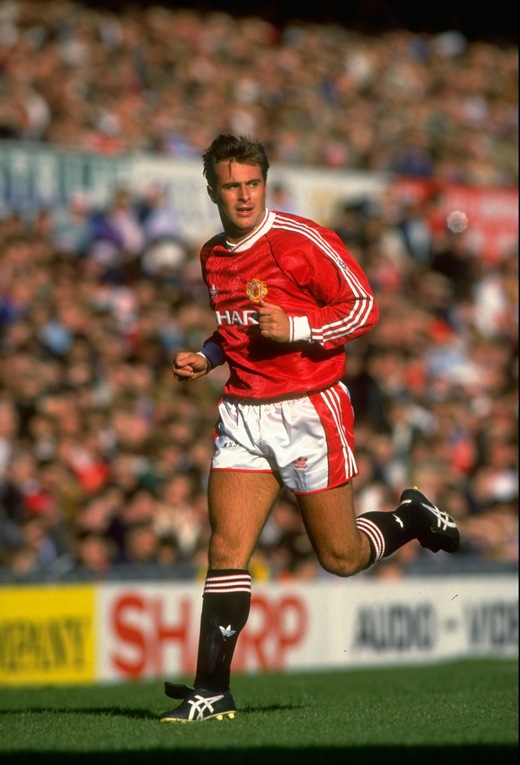 A versatile player, Clayton Blackmore gave everything for the Reds' cause.

Mr Utility: As versatile as they come – sporting every outfield shirt between 2 and 11 – the Neath-born Clayton Blackmore gave combative and loyal service in midfield and defence across a decade between 1984 and 1994. His latter years were the most profitable: he played at right-back in United’s 2-1 triumph over Barcelona in the 1991 European Cup-Winners’ Cup final (clearing the ball off the line near the end) and figured 14 times in our first Premier League triumph in 1992/93. After 245 games and 26 goals, he left to team up with old United teammate Bryan Robson at Middlesbrough.

Stayed in Wales: Among the more bizarre ephemera surrounding United’s European jaunts was the trip to basement battlers Wrexham, 91st in the Football League, on 23 October 1990, for the second round, second-leg clash of that year’s victorious European Cup Winners’ Cup campaign. UEFA rules decreed the visiting team must be in the host country the night before the game, so United, already three goals to the good from Old Trafford, dutifully crossed the border. Despite another fine performance at the Racecourse Ground by Wrexham’s pint-sized veteran player-coach Brian Flynn, the Reds won 2-0 through Steve Bruce (also on target from the spot in the first leg) and Mark Robins, to finish 5-0 aggregate winners. 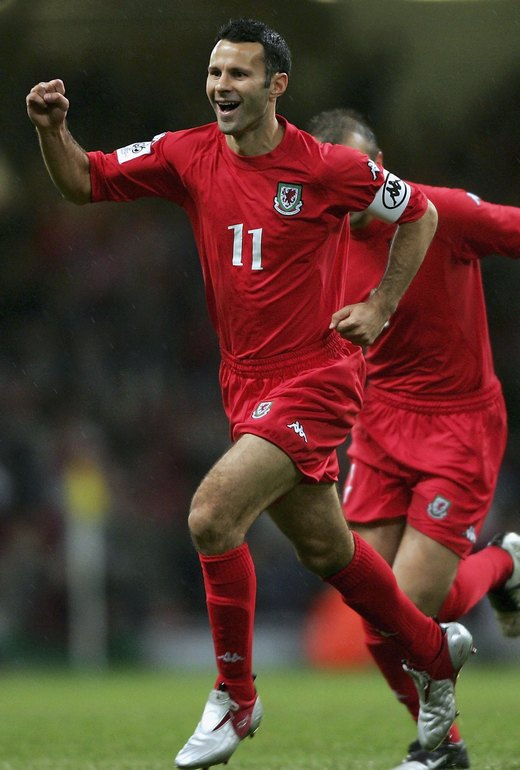 Ryan Giggs, United's most decorated player, was always proud to play for Wales.

The life of Ryan: With such close Manchester ties, it’s easy to overlook the fact that Ryan Wilson, as he was then, entered the world in Cardiff in November 1973. English football’s most-decorated player, he was also the youngest player to have turned out for Wales, winning the first of 64 caps (scoring 12 goals) as a substitute against Germany five months after his Football League debut in October 1991 aged 17 years 321 days. While some consider it a shame he never figured in a major international tournament, Giggs had no regrets. “I’d rather go through my career without qualifying for a major championship than play for a country where I wasn’t born or which my parents didn’t have anything to do with,” he said. 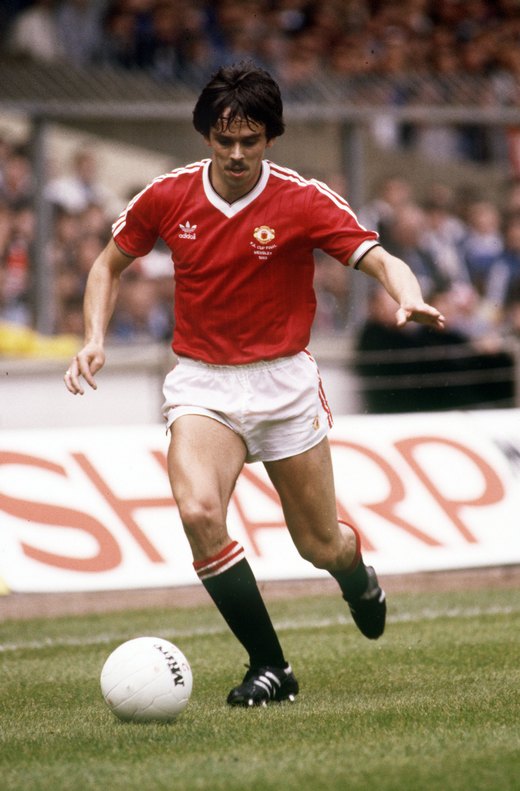 Alan Davies, who won the FA Cup with United at the age of 21.

Gone, but not forgotten: Another player who served both United and Swansea was Alan Davies. Born in Manchester to Welsh parents, he picked up a 1983 FA Cup winners’ medal at 21, replacing the injured Steve Coppell against Brighton and Hove Albion and set up the first two goals. A broken ankle interrupted his Old Trafford progress, as did a leg-break at Newcastle United (whom he’d joined in 1985), before 127 games during two spells with Swansea (1987-89 and 1990-92). Struggling with depression, Davies took his own life at the age of 30 on 4 February 1992. Around 300 mourners – including Swansea and United teammates past and present, and Welsh boss Terry Yorath – attended his funeral in Blackley. United duly sent a full-strength team to Swansea for a pre-season memorial game in his honour.

Final destination: With Wembley being rebuilt, Cardiff's Millennium Stadium became a regular haunt in the early 2000s. United and Liverpool made history there on 12 August 2001, becoming the first teams to play a match on British soil under a closed roof – that year’s Community Shield. A crowd of 70,227 saw debutant Ruud van Nistelrooy score in a 2-1 defeat, but there were happier times to follow: a Community Shield penalty shootout victory over Arsenal, a 3-0 FA Cup final victory over Millwall, 2005's FA Cup semi-final win over Newcastle and, though Arsenal then edged the '05 final on penalties, the following year's Carling Cup final win over Wigan proved to be the springboard for grander successes.

Sir Alex's home farewell: There’s a place in Old Trafford folklore for the opposition on special club days – think Sir Matt Busby’s fond farewell against Everton, and the heartfelt tributes to George Best at West Ham and then West Bromwich Albion. Wind back the clock to 12 May 2013, and the end of an era as Sir Alex led Manchester United out for his last home game against Swansea and his 1,499th match in charge. Goals from Chicharito and a late winner from Rio Ferdinand gave the champions a 2-1 victory, but visiting fans played their part in the occasion by joining in an impeccable send-off.