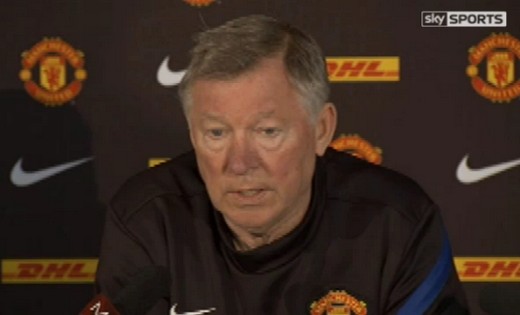 Sir Alex Ferguson admits he's "had a word" with Ashley Young about going down too easily inside the penalty area, although maintains referee Mark Halsey was right to award United an early penalty against Aston Villa last weekend.

When Young went to ground under a challenge from Villa defender Ciaran Clark, Halsey had no hesitation in pointing to the spot. Villa players were incensed by the decision and argued the Reds winger had made the most out of minimal contact. It's been a hot topic for debate in newspapers and on television ever since.

Sir Alex acknowledged at the time that Young, a player who arrived at Old Trafford last summer from Aston Villa, "overdid it" and took "a dramatic fall". But he was also insistent that Clark had committed a foul - a view he reiterated at his press conference on Friday morning.

"If [Clark] doesn't bring him down Ashley's going to score," he said. "It was a clear goalscoring opportunity and he did catch him.

"We have a player here who stays on his feet and he's been doing that for 20 years. How many penalty kicks has Ryan Giggs won for Manchester United?

"He's won five in 20 years. That's some record. Do you know why? Because his balance is so good and he never goes down. That's the amazing thing about him."

"I'm not sure Ashley tried to get the penalty kick but he certainly went down quickly. I've had a word with Ashley and he understands where we're coming from. Hopefully it makes a difference."

The Reds boss went on to bemoan the way diving - or "simulation" to give it its technical term - has infiltrated football at all levels and believes the furore currently engulfing Ashley Young is purely down to his status as a Manchester United player.

"I watched Real Madrid v Bayern Munich and it was absolutely ridiculous. Players diving, rolling about... [far worse than] what Young's been accused of and the way the press have reacted because it's Manchester United. There's no doubt about that.

"You also saw it again the other night in the Chelsea v Barcelona game. We're in an age where you're almost expecting it now.

"You get bad decisions and you get good decisions. It evens itself out, believe me. It's the same for everybody.

"We didn't get [a penalty kick] against Wigan last week but we didn't scream from the rooftops about it. We realise it happens. We got a penalty kick against us when we played Newcastle which was never a penalty kick. We had an apology from Mike Riley for that. It happens."

Former United captain Gary Neville, speaking in his role as a pundit for Sky Sports, was blunt this week in his assessment of the "diving culture" in football and said players who stay on their feet instead of going to ground are often punished for their honesty.

Sir Alex would appear to agree.

"We have a player here who stays on his feet and he's been doing that for 20 years. How many penalty kicks has Ryan Giggs won for Manchester United?

"He's won five in 20 years. That's some record. Do you know why? Because his balance is so good and he never goes down. That's the amazing thing about him."