Sir Alex: Van Gaal and Ryan Giggs can learn from each other 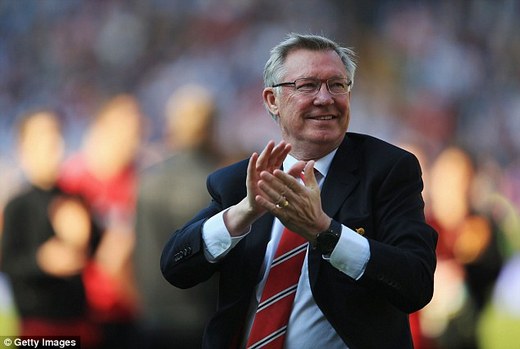 The legendary United manager, writing in updated chapters of his autobiography, admits he struggled to deal with leaving his Old Trafford last season, but seems happy to have a man he calls an 'ultra-professional' at the helm now.

Ferguson played a part in appointing his successor David Moyes, but now says United's board made the right choice in going with Van Gaal after a difficult transitional season last year.

The 72-year-old Scot adds in the new edition of his book, extracts of which were leaked on Tuesday, that he sees Ryan Giggs as a great choice as Van Gaal's assistant, saying that the pair can learn a lot from each other.

'Louis is what I would call a managers’ coach,' Ferguson writes. 'He’s one of those committed ultra-professionals. If I had to choose one word for him it would be "formidable".

'Football is his life. Wherever he has managed, every footballer will have learned from him. He was a good choice.'

And Ferguson calls Giggs' appointment: 'a terrific decision. Louis could help Giggs learn about this business; Ryan could help Louis in understanding the inner workings of United.'

The two-time Champions League winning boss was often seen sitting in the stands at Old Trafford last season, with critics saying that his presence heaped more pressure on Moyes during troubled times.

But Ferguson says he found the transition difficult, admitting that he felt 'a little bit disorientated,' and writing: 'I had been the United manager for the best part of 27 years, and now I was in a directors’ seat with fans asking me for autographs.'

Looking back on last season, with United languishing in seventh place in the Premier League, Ferguson also reflects on one of the most contested title races in recent years.

He calls Liverpool's ultimately unsuccessful title charge 'brilliant' but cast doubts on the ability of Manchester City to add to their second Premier League title.

City, currently five points behind early leaders Chelsea, only took the lead in the title race last season late on after Liverpool's defeats to Chelsea and Crystal Palace. City eventually claimed the crown by two points.

And Ferguson says that narrow margin of victory - as well as the City's title triumph in 2012, when they pipped United on goal difference - could show a weakness in City's armour.

'There was no question that City possessed the best group of players,' Ferguson writes. 'Though the fact they have twice won the league so narrowly leaves a question mark. Why is that?'