Sir Alex: Ryan Giggs can play for another two years 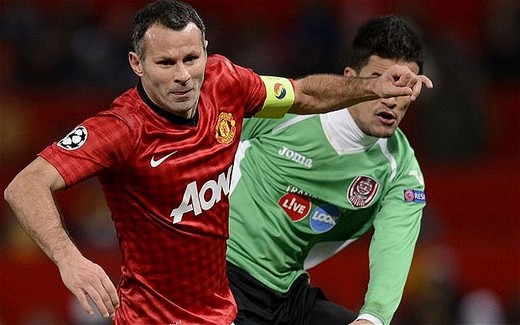 Both Giggs and team-mate Paul Scholes find themselves in a permanent state of ‘retirement watch’, particularly as the latter has already reversed a decision to end his career.

Ferguson does not believe the duo have decided what to do at the end of the season, and in the case of Giggs he is predicting he will be around for a while longer.

“It’s the kind of speculation you expect because we only put older players on one-year contracts,” Ferguson said. “I think that Ryan Giggs will play for another year, or even maybe two years.”

One player certain to be at Old Trafford for the foreseeable future is Jonny Evans, who has extended his deal at United until 2016.

“It’s in keeping with our normal policy that when the younger players get to the second last year of their contract we have to do something about it,” Ferguson said.

Beyond the busy Christmas schedule, thoughts are inevitably drifting towards the visit of Real Madrid in the Champions League.

Ferguson says he is relishing the tie, particularly the return of Cristiano Ronaldo, who he expects will receive a hero’s reception.

The Manchester United manager was asked if he could imagine Ronaldo ever rejoining the club he left two years ago.

“I don’t see that. I’d love to see that, but it’s fanciful thinking really,” Ferguson said. “First of all how much it would take to get him from Real Madrid and secondly, I don’t think there’s any chance they would want to sell him. But you never know.

“I was sorry when he left, don’t get me wrong, but equally I honoured what he wanted in terms of he gave me that extra year. I had absolutely no problem with letting him go to Real Madrid after that.

“It wasn’t disloyalty because I got another year out of him when he wanted to go the previous year and he honoured that and was fantastic for us. He went with our blessing. My way of looking at it is that we were lucky to have him for six years and the United fans would share that.

“I’ve been very fortunate in having players of the quality of Scholes and Giggs, I’ve had fantastic players - you add Cantona to that. Ronaldo’s certainly in that bracket.”

Ferguson began his press conference at Carrington on Friday by suggesting it was written into Ronaldo’s contract when he left Old Trafford he could never play against United.

“I think it will be a disgrace if he plays against us anyway. He has no loyalty to us,” he joked. “One thing is for sure, he’ll get a great reception and quite rightly when he comes onto the pitch. After that they can boo all they like.

“The only player in my time here who was booed, simply because he went to Liverpool, was Paul Ince, but he was a terrific player for us too.”

Ronaldo, meanwhile, says he will not celebrate if he scores against United. “It’s thanks to Manchester United that I play for Real Madrid. Without them, I wouldn’t be the player I am today.

“I still speak with Sir Alex Ferguson. I miss him a lot, and I miss United. I felt very good there, it was like a family. I had six great years there and I am still friends with my team-mates.”