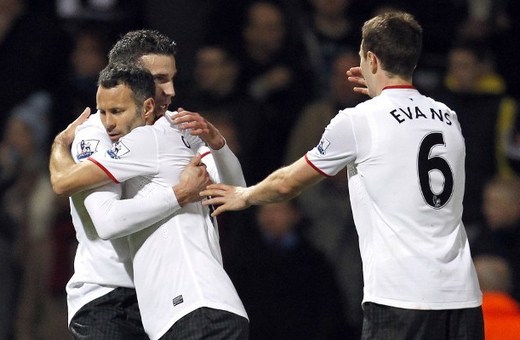 Sir Alex Ferguson says you can never write off Manchester United after the Reds clinched a last-gasp draw against West Ham in the FA Cup third round at Upton Park.

Ryan Giggs and Robin van Persie came off the bench in the second half with United 2-1 down in the tie after James Collins twice scored to overturn Tom Cleverley’s first-half opener.

Heading into the dying stages of the match fans might have been forgiven for thinking that the game was out of United’s reach.

“You never do that with our team [write us off],” the boss told ITV Sport. “But certainly when you’re 2-1 down with a couple of minutes or three minutes left, you just hope you get a break.”

United’s equaliser wasn’t any old scrambled, scrappy finish either. Giggs’s pass and van Persie’s take and finish were supreme. The boss added: “You have to say, the manner of the goal, the pass from Ryan Giggs, the first touch from Robin van Persie and his finish were absolutely world class, absolutely fantastic.”

Van Persie’s continuing impact in his first season at United shows no sign of waning. “I think it’s a challenge, coming to a new club, but his experience… he’s a well-established international, he’s a mature age now and he’s brought that maturity to our forward line. His performance coming on was tremendous.”