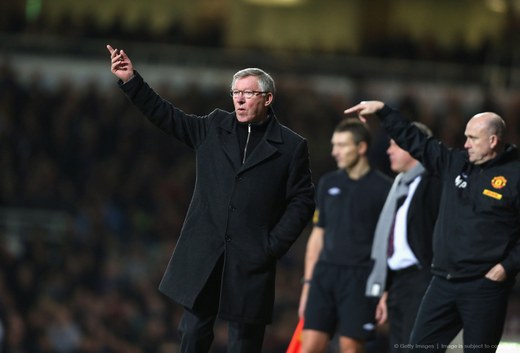 Sir Alex Ferguson has once again outlined his desire to win this season’s FA Cup after Manchester United secured a dramatic third round draw with West Ham on Saturday.

The boss cut a frustrated figure for some of the match at Upton Park as the Reds trailed to Sam Allardyce’s typically well-organised Hammers, who held a slender 2-1 lead during the second half thanks to a brace of goals from James Collins.

Thankfully, Sir Alex’s mood was lifted as substitute Robin van Persie showed his immeasurable class in the 90th minute, latching onto Ryan Giggs’ sublime pass to slide past Jussi Jaaskelainen and book a yet to be scheduled replay at Old Trafford.

“We want to stay in the competition and have a go at winning it,” Sir Alex told MUTV. “We’ve had some terrible draws over the years and been knocked out early, we don’t enjoy that. For us to be losing 2-1 in that game was amazing given the chances we created and the football we played.

“But when you play West Ham you have got to defend your crosses from the set pieces because they are brilliant and the best team in the league at that, but we didn’t do it. Twice, from the same position, James Collins scored from the same type of cross from Joe Cole and we lost two goals.

“Really, you could say it was a travesty but they are good at it and you have to admire that part of their game. Given some of the football we played and the chances that we missed, we should have really been home safely.

“It was a fantastic piece of play for our first goal and we played a lot of good football. We maybe should have been ahead at half-time but as I say, we have to defend better than that. They are good at what they do and you have to give them real credit because they are a handful.

“When Ryan Giggs headed over the bar, Danny Welbeck hit another over,  Tom Cleverley hit one more over and then Shinji Kagawa had one blocked near the line, I thought it wasn’t going to be our day.

“But you have to praise the pass from Ryan and the first touch of the ball from Robin. The finish was absolutely world class. You are hoping he is going to score given his ability to do that. There were only a few minutes left so it was a great goal for us.”

Although the replay with West Ham is yet to be arranged, it is likely to be played during the week before Saturday 26 January, when the fourth round matches are scheduled, meaning United will have to contend with a busier than expected New Year.

However, with a host of players returning to first team training, including midfielders Anderson and Nani, and a full complement of defenders at his disposal, Sir Alex feels his squad is strong enough to cope with the physiological demands of fixture congestion.

“We have got a good strong squad and I’m sure that all of our players will be back by the time we play these games. Nani started training and is almost fit now and all of the defenders, including Phil Jones, will be ready in the next week or so. We have a strong squad so why not use it?”