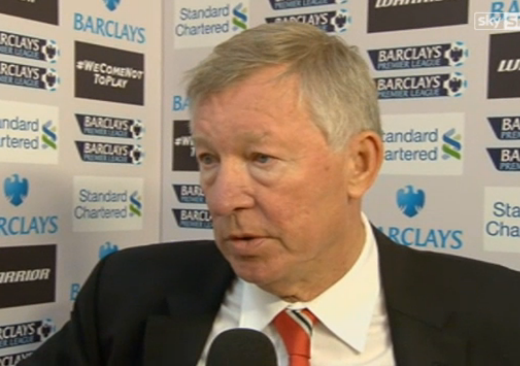 United's gritty victory over Liverpool at Anfield will not enter folklore as one of the Reds' greatest displays, but Sir Alex Ferguson is hopeful that the result will lay down a marker for future trips to Merseyside.

A famously impressive record at the home of the Merseysiders has waned in recent seasons, and Sunday's victory - a first in almost five years - is seen by the United manager as a potential platform for future victories on hostile turf.

"In the last four years here we haven't played well," Sir Alex told MUTV. "Today at least we've got a result. Hopefully that's a turning point for us because if you look back over the years we always did really well here.

"I think it was about five, six, seven years in a row we did exceptionally well, but it goes in cycles anyway. Before we had that run they had a period in the late '80s of getting results against us, so it's maybe our turn to start."

Focusing on the short term, Sir Alex conceded that his team had been below par in procuring the victory, and only imposed themselves on the game after Jonjo Shelvey's red card.

"I thought we were poor, to be honest with you," he said. "I think the last four years we've allowed the crowd to get to us a little bit - they give fantastic support to their team and they really dominated the first half. Second half they got a great start. With ten men I thought that was a great boost to them because it was something to hold on to, but credit to the players in that respect; the second half we played much, much better, but we were against ten men. I think Scholes, Carrick and Giggs' experience got us through."

Shelvey's red card provoked a furious reaction from the Liverpool midfielder, his team-mates and the home support, but Sir Alex was unwavering in his assessment of the youngster's lunge on Jonny Evans - and he shrugged off Shelvey's finger-jabbing tirade towards the United manager as he left the field.

"I think it's a clear sending off, I've absolutely no doubts about it," said Sir Alex. "I've seen the replay. It was reckless. Jonny Evans, who has dived in, went for the ball and got the ball, no question about that, but Shelvey was nowhere near getting the ball and could have given Jonny Evans a real bad injury. He was very lucky, actually.

"He (Shelvey) came and blamed me. Why not? Why look at himself in the mirror? Just blame someone else. I think the boy's young and when he looks at it again he'll realise the stupidity of it. He may apologise, he may not." Shelvey later Tweeted that he had apologised to the United manager.

Despite the dismissal, it took Steven Gerrard's opening goal to spark United into life, and the boss was full of praise for Rafael's superb leveller, and the nerve shown by Robin van Persie, scorer of the match-winning penalty.

"[Rafael's goal] got us out of the mire," he said. "It was a fantastic goal, a good bit of football and it put us in the position where we didn't need to panic and worked our way through the rest of the game. It wasn't easy for him [van Persie], but he's taken it well, just the way I envisaged he would take these penalties. When he was at Arsenal, either side he would thunder them home. [Pepe] Reina's had a good attempt, he got a hand to it, but the power of the shot has made it safe."