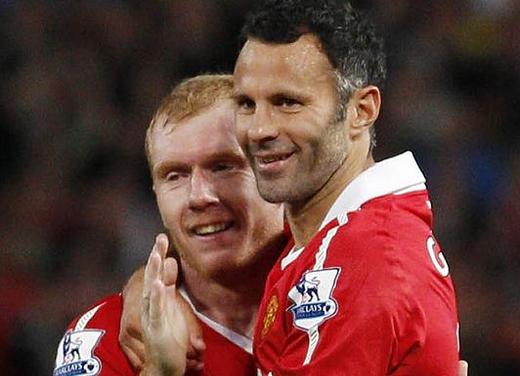 Sir Alex Ferguson has revealed that he feels "lucky" to have managed Ryan Giggs and Paul Scholes during his time in charge at Manchester United.

The Red Devils secured their 20th league championship with a 3-0 victory over Aston Villa this evening, where Giggs provided hat-trick hero Robin van Persie with two of his three goals.

Tonight's triumph was the Welshman's 13th top-flight winners medal, while Scholes has also collected 11 titles, and Ferguson admitted that he has struck gold by having the pair in his squads over the years.

"Ryan Giggs, deary me, he is a freak, a unique freak," says Fergie. "A phenomenal man. We are lucky to have him and Paul Scholes, you are blessed as a manager.

"You have to look at how lucky you have been. Other ingredients come into it but I am lucky to have them."

Giggs made his United debut in 1990, while Scholes first donned the red shirt in 1993.