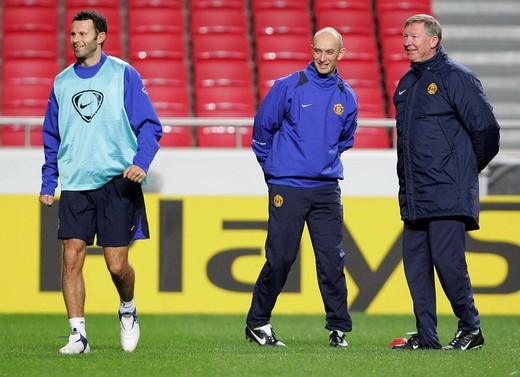 Manchester United legends Sir Alex Ferguson and Ryan Giggs have paid tribute to first-team physiotherapist Rob Swire, who is retiring from his role after 23 years with the club.

Swire joined the Reds in 1991 and was assistant to Jimmy McGregor and David Fevre before becoming head physio in 1999. Sir Alex and Giggs worked with Rob during his time at Old Trafford and are both keen to wish him well for the future.

“I remember Rob starting at the club – he was a very keen young man and always very focused on trying to improve himself and learn more,” Sir Alex told ManUtd.com.

“I was very lucky in that I had a lot of loyal people working for me during my time at the club, people like Rob, Les Kershaw, Dave Bushell, Jimmy Ryan, Paul McGuinness – they all worked for me for 20 to 25 years. I had wonderful loyalty from Rob. He’s a good person and a lovely man. I never had one issue with him in all the time he was with me. He’s obviously looked at his career now and wants to spend more time with his family.

“A lot of people in the game can get carried away with the celebrity status within it and of course we’ve had some fantastic stars at our club but it never affected staff like Rob. They’ve always helped the players keep their feet on the ground and that’s credit to the kind of club we are. I worked with Rob for such a long time and I’m very proud of the job he did. He served the club so well and I wish him all the very best for the future.”

Giggs echoed those sentiments, adding: “Rob has been a great servant to the club and has been here for as long as I can remember. He has always taken great pride in his work and is a true professional.

"I would like to thank him for all his help and guidance over the years and for being instrumental in keeping me in the game for so long. He has worked tirelessly for the benefit of the team and has barely had a day off since he joined.

"I know he will enjoy spending more time with his family and I’m sure we will see him watching a few games at Old Trafford next season.

“On behalf of everyone at Manchester United I would like to extend our warm wishes and congratulations to Rob on his retirement.”