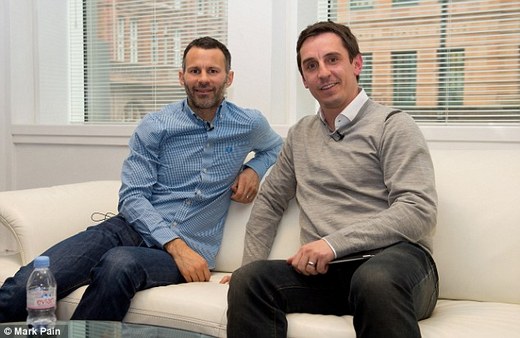 Retirement? It's not a given for Ryan Giggs. The Manchester United midfielder refused to rule out playing next season in an interview with former team-mate Gary Neville as he approaches his 40th birthday.

But the Welshman has one eye firmly on management when he eventually hangs up his boots, by which time he could be the oldest ever outfield player in Premier League history.

Gary Neville: What do you think Ryan Giggs will be doing when his career ends, will it be coaching, do you want to be a manager, will you want to go into restaurants and business?

Ryan Giggs: I’ve got all those options, obviously I’ve got other businesses with yourself, we are doing our pro-license as well, so I’m preparing myself for coaching and for management as well, it’s a great experience that I’ve got at the moment of still playing but seeing the other side of how you prepare a team and that coaching element that perhaps you wouldn’t get as a player. So, who knows, who knows.

GN: What are the differences between this season and last season in terms of the managerial setup and coaching setup?

RG: Well just when I thought we got rid of one Neville, another Neville came back! That’s been a major change. No, I think obviously, it’s a massive change with Sir Alex going, but the gaffer has come in this year and of course he’s got his own ways of doing things and I think the players have taken it on board. I’ve really enjoyed the training, really enjoyed the way the manager works and I think probably the inconsistent start is down to the players not playing as well as they can do. 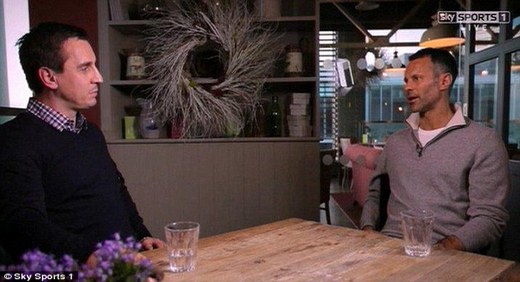 What's ahead: Neville and Giggs discuss the future ahead of the midfielder's 40th birthday

GN: Would you say the players need to take responsibility for the inconsistent start because obviously the new manager, he’s been put under pressure?

GN: Did you feel before that Arsenal game that there was a switch of focus and intensity within the group?

RG: Yes, I thought it was a real professional, really good, solid performance and you could see the mentality of the players that we were not going to lose this against an Arsenal team that have just been to Dortmund and beat Dortmund and you know a very good Arsenal team. Yeah, that’s what I’m saying, the consistency and the unbeaten in seven or eight, that’s what it gives you. It gives you that sort of toughness and mentality that we’re not going to get beat.

RG: It’s just longer hours really. No it is, you know I’m getting there a bit earlier and I’m involved in the meetings before training, what we’re doing in training and obviously looking towards the games coming up. Practically I’m not doing that much because obviously I’m still training but where I can, I take five or six of the wingers and do stuff with them or maybe when I’m not playing at the weekend I’ll take the players who aren’t involved in the game, seven or eight of the players, it’s all new, like starting again.

GN: So, the team meeting comes Friday, you’re picking your team, all the coaches are sat around what do you say?

GN: So there’s this game against Cardiff on Sunday which is obviously a special one for you. Is this a game where you’ll be recommending that you’ll play?

RG: Yeah it will be, I mean, I never thought it would happen, but obviously Cardiff is extra special because it is where I was born, all my family are there, I’ve been buying tickets off all the other players. You know I’ve got a cousin who is a steward there, who’s worked since there since he was 14, 15, in the car park, stewarding. So, yeah I hope I’m involved. 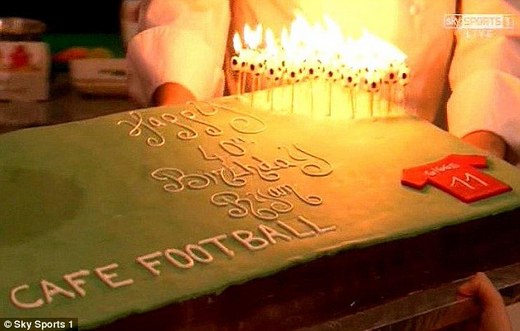 Celebrate: Giggs was given a 40th birthday cake at Cafe Football, which has been set up by the Welshman and Neville

GN: You lived seven years in Cardiff and 33 years in Manchester, where’s home?

RG: I class myself as a Welsh Salfordian

GN: Is that a new type of person?

RG: No, it is. I am Welsh, all my family are from Wales; grandparents, cousins, aunties, I love playing for Wales, I love going back home. But you know, Salford and Manchester are now home.

GN: You’re going to be 40 years of age which is staggering. Is that the magic number, is that the age you want to retire?

RG: I don’t know, I’ve never been guided really by the age, it’s just about how I felt, if I’m contributing, if I’m still getting picked, still enjoying it, that’s the sort of markers that I look for and all those things I feel like I’m doing. Yeah I could probably contribute a little bit more but hopefully that will come as the season goes on. But no just because I’ve turned 40 doesn’t mean that’s it, if I felt like that then I might as well just pack it in now but I still feel good and still enjoying it, so no not really.

GN: Is there a difference to how you feel now, nearly upon your 40th birthday to let’s say two years ago or are you exactly the same in terms of fitness?

RG:  No the older you get, I mean you’ll probably know this, when you have a bad game you start asking questions of yourself because you’re critical of yourself, I mean I’m my own biggest critic.

GN: Are those doubts creeping in?

GN: Quite a few from what I remember…

RG: I think when you have a bad game when you’re 38, 39 then… ’his legs have gone, he’s too old’ but that’s something you have got to deal with.