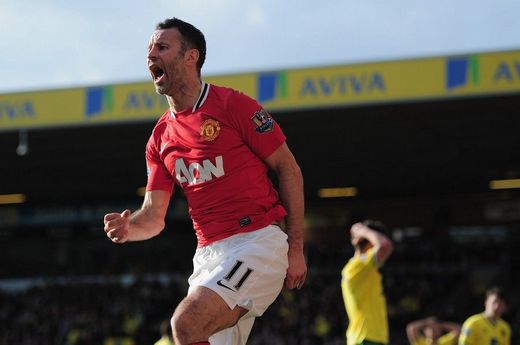 Ryan Giggs admits the fans and Sir Alex must be frustrated with the overall performance at Norwich but the late matchwinner was obviously delighted to grab the three points in true United fashion.

The Reds took an early lead through Paul Scholes but failed to build on the fine start and there was a sense of inevitability about Grant Holt's equaliser with only seven minutes left. Lesser teams would have crumbled but, as is the trademark of any of the manager's teams, a late rally put the home defence under sustained pressure for the first time in the game and, in Roy of the Rovers fashion, the man making his 900th appearance snatched the all-important goal.

The celebrations showed just what it meant to everybody connected with the club and Manchester City's lead at the Barclays Premier League summit is now cut back to two points.

"I think it's team spirit," replied Giggs when asked by MUTV how United continually manage to conjure up late drama. "Knowing we are going to create chances late on.

"Probably today was frustrating as we created more chances in the last eight minutes or so than we did in the whole game. That's probably frustrating for the fans and the manager but credit to the lads as well. We kept going when our heads could have quite easily gone down. Norwich put us under a lot of pressure but we kept going and got the goal.

"It was a mixture of things really. Do Norwich stick or twist? Do they try and defend the draw or go for it? Obviously, we always go for the win and we've got players on the park who can score and create goals. Ashley [Young] came onto the pitch and put in some great crosses, obviously like the one for my goal, so we've got goals from all areas."

Giggs feels it could be a key moment in the title race but admits it's too early to say ahead of a tough assignment at Tottenham next weekend as Spurs will be smarting after their derby-day hammering by Arsenal.

"We'll know more at the end of the season," added the Welshman. "The pressure was on us today. Obviously, City played yesterday and won quite easily but Norwich is a tough place to come and we've managed to dig the result out. It's an important win for us."

To see Giggs rejoicing in front of the away fans after capping a landmark appearance at the death was evidence, if any was needed, of how much pulling on the Red shirt still means to him.

"You've seen that from the celebrations right in front of the fans," he recalled. "And late on. It doesn't get any better than that. It's a feeling that won't change whether you're 17 or 38 like I am now.

"To play for such a great team, a great club and the team I've supported and grown up with, it's obviously special to play 900 games. I'll keep going and hopefully there's more goals to come."