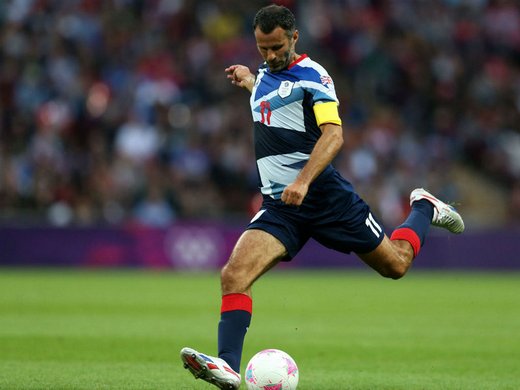 Usain Bolt may want to swap the track for Old Trafford – but Ryan Giggs has no regrets about opting for a career in football rather than athletics.

The veteran United midfielder is back to the day job after his enjoyable Olympic sojourn.

His Team GB adventure was never going to be an embellishment to what English football’s most decorated player modestly describes as a ‘pretty good career’.

And even after the inspirational effects of the London Games, with Jessica Ennis, Mo Farah, Chris Hoy among many others, becoming role models to a generation of future Olympians, Giggs will be glad to get back to doing what he does best in the red of United.

Jamaica’s 100m and 200m champion Bolt would like to join him – asking Sir Alex Ferguson to give him a trial after his London 2012 heroics.

But there is no chance of Giggs heading in the opposite direction.

“I tried to do a bit of both track and field,” he said. “I was into sprinting obviously, but I had pretty good stamina so I ran the 800m as well – I tried to cover everything.

“It was always football and rugby for me. I played rugby league until I was 13, and there was a point when I was going to have to pick one and football was always going to be the winner.”

There is no one more grateful about Giggs’ childhood decision than Ferguson, who famously turned up on his doorstep in a bid to convince him to sign for United.

The result has been one of the most successful partnerships in the history of football.

Giggs is the one common denominator in each of Ferguson’s 12 Premier League titles at United.

Add to that two Champions League winners’ medals, four FA Cups and four League Cups and it is easy to see why the United manager wants Giggs to play on into his 40s.

Ferguson, who handed the 38-year-old a new one-year contract last season, believes he can go on until 2014.

And such is the strength of their relationship that the Scot didn’t hesitate to give Giggs the green light to join Stuart Pearce’s Olympic squad.

“Right from the start he was keen for me to be involved and he’s backed me ever since,” said Giggs. “He’s been supportive all the way through my career, since I was 13 through to today.

“My career for my country has obviously been the total opposite to my club career, I’ve been so successful with United but not so with Wales.

“I would always watch the other lads, especially those ones I grew up with, Becks, Butty, Nev, Scholesy, go away on international tournaments and I would wish that I could do the same.

“We were only a goal away from qualifying for the World Cup in USA. We missed a penalty in the final game against Romania, and if we’d beat them that night we would have gone to the World Cup.

“Then 10 years later under Mark Hughes we had a play-off against Russia to qualify for the Euros, and we lost out again.

“In my 16-year career with Wales I never qualified for a major tournament. I was only 19 the first time we came close with Wales, and I think you do believe that it will come again for you in the future.

“Before that happened with United we’d lost the league to Leeds in 92, but you always think you’ll get more chances, and I did. I had a similar feeling with Wales, we had a good set-up and decent players in Mark Hughes, Dean Saunders, Neville Southall and Kevin Ratcliffe. We had a really decent team, but it wasn’t meant to be.”

The Olympics proved a welcome distraction to a summer in which United had to come to terms with the heartbreak of losing the title to City in the final seconds of the season.

While Ferguson has searched for the players he believes can make United champions again – signing Shinji Kagawa and Nick Powell, as well as pursuing Robin van Persie, Lucas Moura and Eden Hazard – Giggs was hoping to lead GB to gold.

Now his attentions will be focused firmly on winning a 13th league title and reasserting United’s supremacy.

Ferguson is hopeful of pushing through the signing of Van Persie from Arsenal before they kick off their campaign against Everton on Monday.

But United will also be boosted by the return to fitness of key players like Nemanja Vidic, Tom Cleverley, Anderson and Darren Fletcher, who is attempting come back from a serious bowel condition.

Giggs believes the return of the Scotland midfielder will be vital to United’s title hopes.

And he says Fletcher might have been the one to threaten his own involvement in the Olympics had he been fit enough for Pearce to call upon.

“He is a talent and he is a really important player for both United and Scotland,” he said. “I’m sure if he had been playing regularly then Stuart would have had the decision to make whether to pick him or not. Because he definitely would have been in the reckoning.”