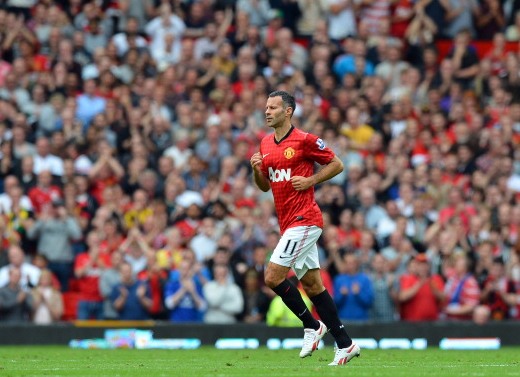 Ryan Giggs will never forget his first visit to Istanbul.

'I remember it vividly. It will always stick with me,' the veteran Manchester United midfielder said.

'I was 19 and, when we arrived at the airport, there were all the banners and fans. Thousands of fans screaming at you.

'There were things being thrown at us when we were driving away on the coach. Outside the hotel their fans were chanting all night, making sure we didn't get any sleep. People were phoning the hotel room.

'Prior to the game, the manager told us to go on the pitch and sample the atmosphere.

'The fans had been in the ground for hours and hours. The atmosphere was buzzing 90 minutes before kick-off.

'We were stood in the middle of the pitch watching the fans chant. It was one stand to another.'

'When we came off the pitch, it was chaos,' Giggs said.

'Eric had already been sent off and the way back to the dressing room was underneath the pitch.

'There were armed police either side - not the kind of people you would ever mess with. They had helmets, batons, were all ready. And it just kicked off.

'I was just trying to get back to the safety of the dressing room as quickly as possible.

'Obviously not at the time because we lost and went out, but it was a great experience for us.

And they are not so much on a revenge mission for that defeat as nursing an additional sense of purpose following last season's debacle, when United tumbled out of the group stage with only two wins.

After reaching three finals in the previous four campaigns, it was an unexpected blow Giggs and his team-mates are anxious to put right.
And the 38-year-old believes he knows just how to do it.

'We need to win our home games,' he said. 'Usually 10 or more points gets you through, which means winning at home and trying to draw away.

Robin van Persie's appearance off the bench in Saturday's 4-0 Barclays Premier League win over Wigan showed the Dutchman has no lingering effects from the groin injury that curtailed his international involvement.

It also confirmed manager Sir Alex Ferguson's determination not to take any chances in Europe this term after admitting he got his team selections badly wrong last season.

And with fellow new boy Shinji Kagawa also set to return after being given additional time to recover from his arduous trip to Japan, Giggs is expecting both men to make a positive impact.

'Robin has the experience of playing in Europe with Arsenal,' said the Welshman, who became the first player to clock up 600 Premier League appearances at the weekend.

'Shinji is that kind of player who will thrive in Europe, where possession is key.