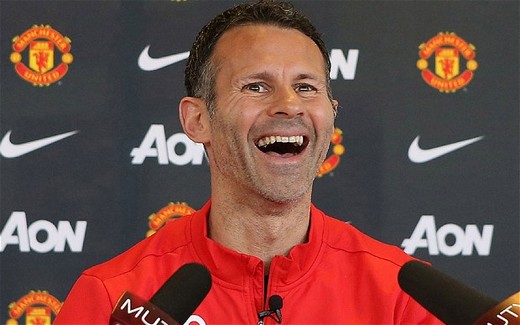 Sir Alex Ferguson has thrown his weight behind Ryan Giggs to become the next manager of Manchester United, supported by the Class of '92

Giggs, who takes charge of his first game as interim manager against Norwich City at Old Trafford this evening, has been placed in control of the team for the final four games of the season by executive vice-chairman Ed Woodward following the sacking of David Moyes on Tuesday.

But despite Holland coach Louis van Gaal emerging as the leading candidate for the job in the wake of Carlo Ancelotti’s admission that he is happy at Real Madrid, Giggs has the support of players and staff within United and Ferguson has now voiced his belief that the 40-year-old possesses the attributes to take the job on a permanent basis.

Despite anointing the doomed Moyes as his successor, Ferguson will advise Woodward and United’s owners, the Glazer family, over the new manager and the Scot insists Giggs, alongside fellow Class of ’92 members Nicky Butt, Paul Scholes and Phil and Gary Neville, should get the job.

“I think that he [Giggs] is the one man they should go to really,” Ferguson said during a fundraising dinner in Manchester earlier this week. “He’s got 20-odd years of experience at Manchester United. I signed him as a kid at 13 years of age. He’s gone through the gamut of emotions at the club – he’s experienced all the highs and lows. He knows exactly what’s needed to be a Manchester United player and I was so pleased he brought Paul Scholes back in, and Nicky Butt of course – two great professionals.

“They understand the club, they are hard workers, they are straight as a die. So you have got the right combinations there, there’s no doubt about that.”

Speaking at his first press conference at United’s Carrington training ground on Friday, Giggs admitted he remained in close contact with Ferguson and would use the 72-year-old as an adviser during the final weeks of this campaign.

Giggs, a member of the coaching staff under Moyes, whose compensation package was settled on Friday, also refused to play down the prospect of him proving his credentials for the manager’s position during the next four games.

“He [Ferguson] was the first person I picked the phone up to,” Giggs said. “Why wouldn’t I? He has been through everything you can as a manager – as a young manager, as an experienced manager, as a successful manager.

“Yeah, he’s given me advice, he’s told me that he’s always at the end of the phone and that’s obviously given me a lot of comfort. It’s good to know I can turn to the manager if I ever need him.”

Giggs, who is expected to eschew a tracksuit in favour of a suit on Saturday in an effort to emphasise his managerial credentials, admits he has four games to impress Woodward and the Glazers.

“Well, I have got a chance to show what I can do and what I am capable of as a manager in a short space of time,” Giggs said. “That is my focus. After that, it is another conversation – we’ll see where it takes us. The next two weeks has to be my main focus. We’re playing Norwich, who are fighting for their lives, so I can’t be looking two or three weeks ahead.”

When it was put to Giggs that both Kenny Dalglish and Pep Guardiola, at Liverpool and Barcelona respectively, took manager’s jobs while younger than him, he conceded that others had already walked down that path.

“Yes, it can happen,” Giggs said. “But it’s not something I’m thinking of at the moment. That’s another conversation to be had three weeks, six weeks, whenever in the future.”

Ferguson’s support of Giggs could prove influential, although it is understood that Woodward and the Glazers favour the appointment of an experienced, world-renowned manager following the failed experiment in turning to a young, British coach in Moyes.

Ferguson believes, though, that United now have the opportunity to mirror the successful blueprint employed by Bayern Munich in handing key roles to former players.

“One of the things we have been criticised about over the years is succession planning,” Ferguson said. “It’s a very difficult industry to say you can have succession planning. But in the case of what we were doing in the last few years, with bringing Nicky Butt into the fold, Ryan into the fold, Paul Scholes into the fold, and Gary Neville was offered a position but he decided to go into television. He could easily come back. The model is Bayern Munich where they had [Karl-Heinz] Rummenigge, [Gerd] Müller, [Uli] Hoeness, [Franz] Beckenbauer and [Sepp] Maier all in the camp. They were all there with their knowledge of the great Bayern Munich teams. And that was our model, and it wasn’t really until David Gill came in we started doing that. And what’s what we see today.”

Ferguson added: “Paul Scholes is one of these guys who has few words but the few words are so succinct, accurate and to the point.

“He is brilliant at it. Many times I would bring in the older guard to discuss certain things that we maybe wanted their opinion on. Scholesy had three or four words – bang, bang, bang ... he was such a revelation for me for a young man to be so positive, a decision maker.

“I think Ryan will get the benefit of that now. That was the first thing Ryan did, he phoned up Scholesy, he was on holiday and called him back.”

Giggs, meanwhile, insists he will put “smiles back on faces” by demanding United-style performances in the next four games.

“I want to bring those standards back up to here [raises his arm high into the air] and where a Manchester United player should be,” Giggs said.

“And not just for one game, for every game. Every time you pull on the red shirt, you give everything you have got, otherwise you’re coming off. But I know what these players are capable of. I’ve seen it this week and I know they are better than the performances they have shown this year.

"I intend now to show the fans that these are good players and have a really positive end to the season.”