Ryan Giggs: it hasn't sunk in yet that Sir Alex Ferguson is leaving Manchester United 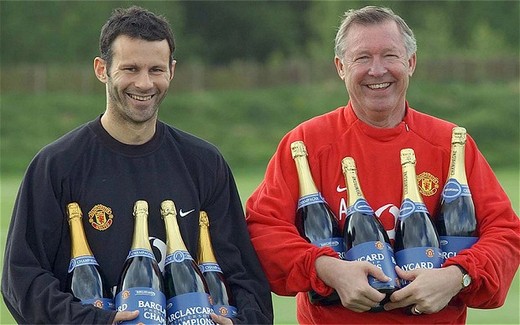 At 39, Giggs will walk into the unknown when he returns for pre-season training in July, no longer able to rely on the old familiarity of Ferguson welcoming him and the squad back to Carrington for another assault on success.

That has been the tale of the last 22 summers for Giggs, yet when Moyes takes charge of his first training session as United manager, a new era will truly begin.

The last time United changed their manager, the biggest challenge facing the new man was to restore order to a dysfunctional dressing room and gain control of a club that had become a byword for underachievement.

Moyes can thank Ferguson for handing him an altogether different undertaking, but there is an argument to suggest that encountering a dressing room of serial winners for the first time, and convincing them that you are the man to take them forward, is just as daunting as the task that faced Ferguson 27 years ago.

“Maybe it is,” Giggs said. “But we have a really good bunch of lads in the dressing room and, whenever the manager needs help, the more experienced players will help. That has been the norm, ever since I have been in the club.

“When I was an apprentice, I used to go upstairs at The Cliff [training ground] for my breakfast and see the likes of Brucey, Gary Pallister and Bryan Robson all in the coaches’ room, having a cup of tea and sharing jokes before training.

“That is how it has always been here. The experienced players have always had a good relationship with the staff and helped each other along.

“What David Moyes is coming into is a good atmosphere, a really good bunch of lads, very good players and a really strong squad, so it is a strong position to be in. But the downside is that you have to follow the most successful manager that has ever lived.

“Managers usually go into clubs when things aren't going great, but this team isn’t on a downward spiral, so I don’t know if that makes it harder or easier for David.”

Tapping into the winning mentality fostered by Ferguson, which has enabled the Scot to hand over a championship-winning team to his successor, should at least give Moyes the opportunity to sustain the success of the Ferguson era.

“We have a lot of young players who have won the title for the first time this season and I know how they will have felt last year after missing out,” Giggs said.

“In my first season, we lost out to Leeds. It probably wasn’t lost in such dramatic fashion as last year, but it was still a big loss for me and I was gutted.

“I just couldn’t wait to get back the following season and I think all of the young lads here came back with the same attitude last summer.

“It wasn’t easy at the end of last season and it wasn’t easy going on your holidays, knowing that you had just missed out. But we have shown great character to come back.”

Moyes, who will take charge of Everton for the final time when they face Chelsea at Stamford Bridge on Sunday, is expected to begin work at United next week, ahead of his official start date of July 1.

Giggs insists that the 50-year-old will not be a stranger when he walks into the club for the first time.

“No, he isn’t, and he is coming here with great respect for what he has done at Everton,” Giggs said. “He has done a brilliant job there and that is evident whenever you play against his teams because it is never easy against them.

“Some of our former players have gone to Everton and been really successful, like Tim Howard and Phil Neville, and what they have said is that he works you hard and expects you to work hard and perform. He sets really high standards, but that is nothing different to what we are used to.”

Whether he remains as a player or moves into a coaching role at some stage under Moyes, Giggs’s presence is likely to be key for the manager.

Speculation has linked Giggs, who will be 40 in November, with a more senior role at the club under Moyes, but he says that his objective is to play on and complete his coaching qualifications next summer.

“I’m going to be playing,” Giggs said. “But if I do decide to finish next season, I want to be in the best position I can to go into a coaching role.

“I’m halfway through my Pro-Licence at the moment and due to go to Turkey for eight days in June for the Under-20s World Championships to complete a case study that I am doing.

“I then finish it next summer, but all I have to do between now and then is get on to the pitch whenever possible to do a bit of coaching.

“It is hard at times when you are still playing as you have to gauge what you can and can’t do, but I will probably use the international breaks to try to get a little bit of coaching in.

“I will need to top up my coaching and will have to get onto the pitch to do some sessions.

I’ve been doing that this year and will continue with that.

“But I signed a one-year contract because I want to contribute to United and I feel I can still do that, so following the manager into retirement didn’t enter my mind.”

When he walks down the tunnel at the Hawthorns at full time following United’s clash with West Bromwich Albion tomorrow, Ferguson’s reign will be up, 1,500 games after it began with a defeat at Oxford United in November 1986.

Back then, Giggs was just about to stray on to United’s radar as a prodigious teenager and meet Ferguson for the first time, on the side of a windswept pitch in Salford.

So the prospect of playing his 941st and final game for Ferguson on Sunday is one that is yet to fully hit the United veteran.

“If I’m honest, it probably still hasn’t sunk in,” Giggs said. “I think it will only really kick in when we turn up for pre-season and the manager isn’t about the place.

“I never, ever thought I would outlast him, that’s for sure. Never, ever. I have only ever known one manager at club level and I have been lucky in the respect that it has been probably the best manager ever.

“So it is going to be strange and it’s going to be weird next year. It will also be sad for me because of the amount of time I have known him and the relationship I have with him.

“He still has a temper and, when he feels like he needs to use it, he will, but the players today wouldn’t recognise him from 20 years ago. They just wouldn’t.

“He was just so ferocious. The desire and the hunger that he still has was just different back then. But now, with experience and the satisfaction of winning and doing so well, he has changed.

“It will be an emotional one on Sunday, knowing that it will be the last time that he will be our manager.

“Not only for the person that he is football-wise, but because of the man he is on a personal level, how he has helped us all with our lives, me more than anybody.

“There are so many memories. You can go from playing for Salford Boys and looking over to see the manager and Brian Kidd watching you play at the age of 13 – you just wouldn’t get that now, the manager of Manchester United watching Salford Boys.

“It was just a massive thing and then he came over and told me he wanted me to train with them for a week. It was just, ‘Yeah, I can’t wait’. But you get to where we are now, to the relationship we have, where he will ask me about players, how the lads are, how the team spirit is.

“It’s a relationship that has evolved over the years, so there isn’t just one highlight, just everything. The good times and bad times.”

How he has seen off golden generation

Paul Scholes: Manchester United
Made his 717th and final appearance for Manchester United against Swansea City last Sunday after announcing his retirement for the second — and last — time on the eve of that game.

Nicknamed 'SatNav’ for the unerring accuracy of his passing, Scholes called time on his England career following Euro 2004 at the age of just 29 after growing disillusioned with his role under Sven-Goran Eriksson.

Will move onto United coaching staff next season after winning his 11thtitle medal this season.

Jamie Carragher: Liverpool
Made a total of 736 appearances for Liverpool, winning every major honour with the exception of the Premier League title during his 16 years in the first-team at Anfield.

Expected to move into coaching at some stage, but his first move post-playing career will be a stint in the Sky Sports studio.

Won the Ballon d’Or in 2001, but after leaving Liverpool for Real Madrid in 2004, Owen’s career began to slide and his hopes of breaking Sir Bobby Charlton’s 49-goal England record were ruined by a succession of injuries and Fabio Capello’s decision to consign him to the past.

Earned a Premier League winner’s medal at Old Trafford, but has started just one first-team game at Stoke City this season.

David Beckham: Paris St-Germain
The most high-profile footballer of his, and perhaps any, generation.

Beckham’s reputation as a goalscoring midfielder was made at Manchester United, as was his billing as football’s most recognisable face.

There have been flying boots, stunning free-kicks, crazy hair-cuts and the England captaincy, as well as league titles in four countries.

Goldenballs will play for Paris Saint-Germain against Brest today and could make his final appearance against Lorient next week. That’s Lorient, not Leyton Orient.