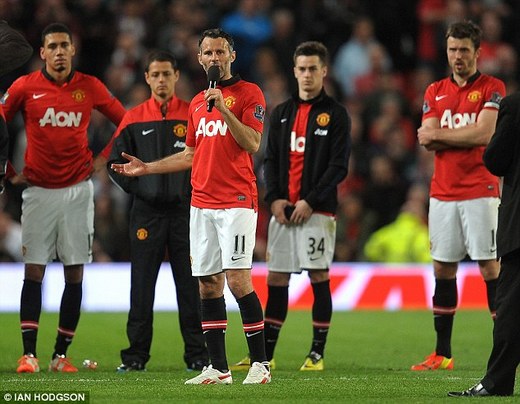 Robin van Persie has seen glimpses of Sir Alex Ferguson in Ryan Giggs during the Welshman's brief spell in charge of Manchester United.

Giggs takes charge of his final match at the helm on Sunday when United visit Southampton.

The 40-year-old made it two wins from three matches on Tuesday night when his team beat Hull 3-1 at Old Trafford thanks to two goals from debutant James Wilson and a strike from Van Persie.

Although there has been a clamour for Giggs to be appointed as David Moyes' successor, the board want someone with more experience, so appear to have opted for Holland coach Louis van Gaal, whose appointment could be confirmed next week.

Giggs is yet to decide whether to play on for another year, or seek to become a manager elsewhere.

The most-decorated player in the club's history could also form part of Van Gaal's coaching staff.

Whatever he does, Van Persie is sure that Giggs, who came off the bench for a 20-minute cameo against Hull, has a bright future ahead of him.

'I witnessed two team meetings as I came in a bit late,' said Van Persie, who returned to the team after a seven-week injury lay-off.

'The one from the last game against Sunderland, and Tuesday's game, were incredible. They were Sir Alex-esque.

'He's been brilliant. And he put in some fantastic passes and almost scored after coming on. He's a legend and I think he shows that every day.'

Van Gaal, who knows Van Persie well due to their time together with the national side, will rely on his countryman to deliver the goals United have been lacking this year.

The Red Devils go into their final match of the season having scored 63 times - 23 fewer than they ended up with last term.

One reason behind that statistic is Van Persie's injury struggles.

The former Arsenal striker, who scored 30 goals last season, was out for six weeks with a thigh problem at the turn of the year and was ruled out for another lengthy period with a knee injury following the 3-0 win over Olympiacos in March.

'It's been a bit up and down for me this year,' said the 30-year-old, who has scored 18 goals this term despite his injury troubles.

'I've not been fully fit. That is where everything starts. You have to get that full season (of fitness).

'You can miss a couple of games, but not many. I missed half (the games) this season.

'I am gutted about that and I just want next year to stay fit, do well and compete again. I am sure we will next year.'