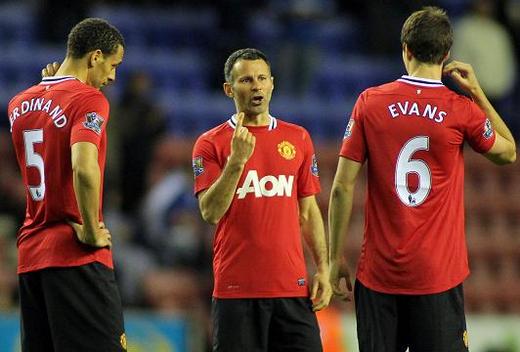 United's lead at the top of the table was trimmed back to five points after a shock 1-0 defeat at Wigan.

The reigning champions failed to take another step towards a record 20th title in a controversial encounter but, in truth, the relegation-haunted hosts deserved to take something from the game with two major talking points set to dominate the post-match discussion.

Assistant referee Dave Richardson flagged to rule out a Victor Moses header in the first half and denied the Reds a blatant penalty with 18 minutes left when failing to spot Maynor Figueroa clearly handling a Phil Jones cross. Shaun Maloney's excellent strike five minutes into the second half was enough to hand Wigan only a third league win at the DW Stadium all season and wreck United's 100 per cent Barclays Premier League record against Roberto Martinez's men.

The Latics dominated much of the first half and were aggrieved not to be ahead at the interval. On the half-hour mark, Maloney's corner was headed home by Moses but the effort was disallowed for a foul by Gary Caldwell on David De Gea. The defender was obstructing the Spanish keeper after getting goal side of Jonny Evans but there was relief that an offence was spotted by the assistant referee Richardson.

Phil Dowd did seem a little quick to award free-kicks in general, with the home players going to ground pretty easily - particularly Franco Di Santo - and a booking for Evans after the slightest of touches on the former Chelsea forward was extremely harsh.

De Gea palmed over a James McCarthy shot and Moses had a hopeful penalty shout rebuffed when driving the ball against Jones as the Reds struggled to make any impression. Ryan Giggs forced a corner after a long-range one-two with Michael Carrick but the first attempt of note from the Barclays Premier League leaders came in the closing stages of the half when Wayne Rooney, who dropped into midfield, steered a tame shot well off target.

Sir Alex Ferguson's frustration on the touchline was evident and, no doubt, he will have had plenty to say to his troops inside the dressing room. Tom Cleverley replaced Ashley Young but there was still no real urgency in the visitors' play and Wigan continued to look the likelier scorers.

So it was no surprise when, after Jones furiously contested the award of a corner, the set-piece was worked too comfortably between Maloney and Jean Beausejour, with the ex-Celtic man skipping past Rooney and firing an unstoppable curler wide of De Gea.

Although Rooney shot over the bar from long range, there was no major response to the setback. The manager took action by introducing Danny Welbeck and then Nani, but it was at the expense of strikers Javier Hernandez and Rooney, and Ali Al-Habsi remained a bystander.

There was a real let-off for the hosts when Jones' driven centre was clearly handled by Figueroa but the protests were waved away and the defender was in the right place at the right time to clear soon afterwards when Giggs' cross evaded Welbeck in the middle. Caldwell tugged at Welbeck's shirt in the box but escaped the attention of referee Dowd as United grew ever more desperate for a break.

Nani's ambitious volley flew over with 10 minutes remaining but, with Jones struggling to shake off a knock, it needed a De Gea save to keep out Moses after he tricked his way past Rio Ferdinand. Moses passed up another opportunity to clinch the points from a Mohamed Diame pass as Sir Alex's side held on.

Al-Habsi made his first save on 83 minutes to keep out Welbeck's shot from an angle but there was no real pressure on the Oman international's goal and the clock ticked down as Figueroa received treatment following a clash with Jones, that saw the right-back booked. Two speculative drives from Carrick were all United could muster before five minutes of injury time was played out. 'We shall not be moved' sang the travelling fans at the end but there is no doubting this is a blow in light of Manchester City's win against West Brom and there's still plenty of work to be done in the title race.

David De Gea
Could never have saved Shaun Maloney's accurately-placed winner but was relieved to see a free-kick awarded for obstruction against Gary Caldwell when Victor Moses headed home in the first half. Although rarely tested, he made one stop from Moses late on.

Phil Jones
Was angry with the decision to award the corner that led to the winner and it was his cross at the other end that should have resulted in a penalty when Maynor Figueroa handled. Tested throughout down his flank, he picked up a knee injury in the second period but produced a fine tackle on Mohamed Diame to show his courage.

Jonny Evans
Picked up a harsh booking for a challenge on Franco Di Santo but was perhaps a little fortunate that another tackle on Maloney did not produce a second yellow card from Phil Dowd. Otherwise, pretty unflappable at the heart of the defence and looked as determined as anybody to try and get things moving.

Rio Ferdinand
Headed away a Maloney centre and deflected a Moses shot off target during rearguard action in the first half. Moses muscled his way past him on one occasion but he recovered to get an important foot in to make a tackle. Combative and continues to work well in tandem with Evans.

Patrice Evra
Escaped when the ball slipped between his legs during a break and hit Moses but was pretty sound defensively. A nice cushioned volley at one point in midfield showed his composure when the pressure was on, although he failed to bomb forward to good effect.

Antonio Valencia
Failed to get into the game against his former club and was starved of any real service on the right wing. Unable to work his way past his markers, he was unable to replicate the magic he produced at Blackburn recently.

Michael Carrick
Hounded in midfield and unable to get into his stride, he still made one vital interception to thwart Di Santo and fed Ryan Giggs in the one United move of note in the first half. His passing wasn't as assured as usual and, unfortunately, his two speculative attempts with time running out failed to trouble Ali Al-Habsi.

Ryan Giggs
A good pass almost released Javier Hernandez and a left-footed cross was deflected wide after receiving the ball from Carrick. Although there were flashes of composure, he was unable to stamp his influence on the proceedings despite lasting the full 90 minutes.

Ashley Young
Did most of his work covering Evra and making some encouraging defensive challenges. Unlucky to be substituted as part of the tactical change at the break.

Wayne Rooney
Had the first shot of note for United but it drifted well wide and he fired over the top soon after Maloney drifted inside him to score the winner. Surprisingly substituted with the Reds chasing an equaliser, but he had spent much of the night in a deeper midfield role on his manager's instruction.

Javier Hernandez
Couldn't work his way past Caldwell after Giggs tried to slide him in and struggled to get any sniff of goal at all. Had a good record against the Latics prior to the match but was continually forced to try and hold the ball up with his back to goal.

Tom Cleverley (for Young, 46m)
Displayed neat touches and plenty of energy, as you would expect, against the club where he spent last season on loan.

Danny Welbeck (for Hernandez, 58m)
Added more muscle than Chicharito and hassled the defenders to at least start putting them under pressure. A decent shift and he had the shot that forced the one save out of Al Habsi.

Nani (for Rooney, 65m)
Given 25 minutes to make some impression on his welcome return from injury but, although trying to conjure something up, he was often crowded out.