Goals from Bojan Krkic and Marko Arnautovic inflicted a Boxing Day defeat on Manchester United, meaning the Reds are now without a win in seven matches across all competitions.
Louis van Gaal described the fixture at the Britannia Stadium as a must-win ahead of kick-off but the Reds were disappointingly outplayed by a flourishing Potters team managed by Mark Hughes, the former United striker whose second season at the Britannia Stadium is going from strength-to-strength.
Wayne Rooney also spoke admirably about galvanising the squad on Christmas Eve and admitted this match could become a defining moment in the season, yet the captain watched the first half from the substitute’s bench after the boss started Ander Herrera ahead of him for “tactical reasons”. It was the Spaniard who registered the first shot at goal, with a 20-yard drive that was saved by Jack Butland. 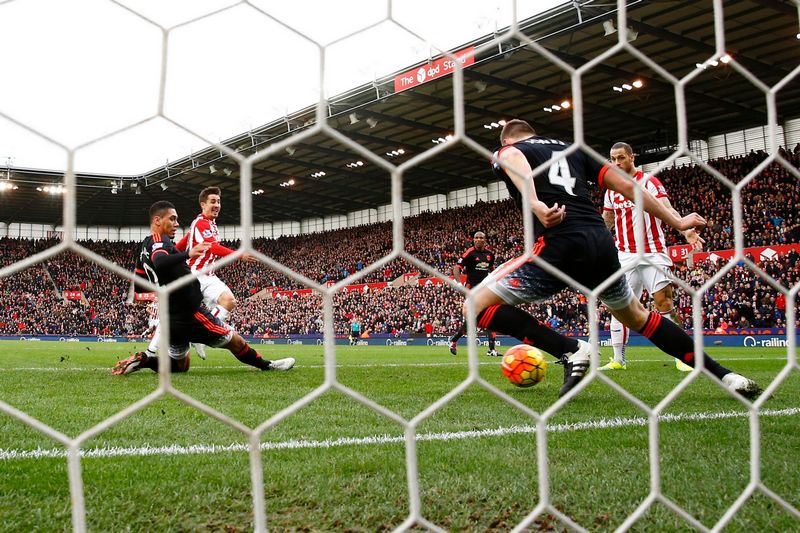 In typically windy conditions, with strong gales blowing through the exposed corners of the stadium, the opening exchanges were scrappy and the weather played a small part in Stoke taking the lead on 19 minutes. Memphis, faced by a bouncing ball, tried to head back to David De Gea but failed to muster enough power, allowing Glen Johnson to intercept and set up Bojan for a simple finish from inside the box. 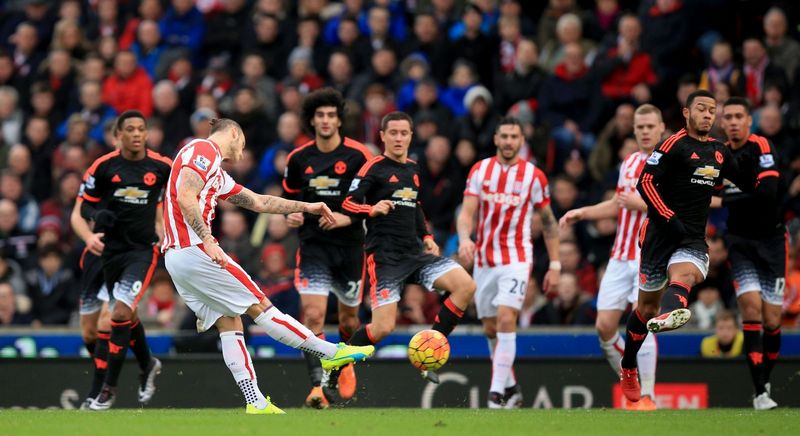 United fell further behind seven minutes later, but the Reds could have done little to prevent this one as Bojan’s free-kick cannoned off the wall and bounced into the path of Marko Arnautovic, who hit a rocket-fuelled shot that soared past De Gea from the edge of the area. The Austrian was especially dangerous throughout the first half and could have scored again when shooting wide when through on goal on 35 minutes, which was the last opportunity of the half despite some late pressure from those in black shirts.

Possession: Stoke 46% United 54%
Shots at goal: Stoke 8 United 6
Shots on target: Stoke 2 United 3
Corners: Stoke 1 United 7
Van Gaal decisively introduced Rooney for Memphis at half-time and the skipper was visibly cajoling his team-mates at the start of the second period, urging them to fight back in difficult circumstances. The 30-year-old played with fire in his belly and flew into several challenges - catching the attention of the referee - yet scoring chances were at a premium as the game uneventfully rolled past the hour-mark. The first real opportunity of the half was created by Rooney as he dribbled away from two markers inside the area to find Fellaini but the Belgian’s close-range shot was well-saved by Butland, the in-form England international who has impressed so much this campaign.
Erik Pieters, who signed a new long-term contract on Boxing Day morning, almost floated a 40-yard free-kick into the top corner on 76 minutes as the hosts searched for a third goal, with the menacing Bojan also forcing a save from De Gea moments later. Former United striker Mame Biram Diouf also caused problems with his movement and fellow substitute Charlie Adam went close with two long-range efforts. Van Gaal made his second and final change on 83 minutes by replacing Herrera with Andreas Pereira and the Brazilian was booked just seconds after coming on, before Anthony Martial and Juan Mata both saw shots saved by Butland as the Reds pushed forward in search of a consolation strike that never came. It's United’s fourth consecutive defeat this month and the next match, against Chelsea, is of great importance.

Michael Carrick to MUTV: “This is Manchester United we are playing for, it’s a special club and it's a privilege to play here - we need to do better, it’s as simple as that.”

Louis van Gaal to Sky Sports: “My thoughts are that we didn’t dare to play football in the first half and then we gave a very bad goal away. Then they scored from a free-kick and then it was half-time."

First-half goals from Bojan Krkic and Marko Arnautovic do the damage as the #MUFC slip to defeat on Boxing Day.