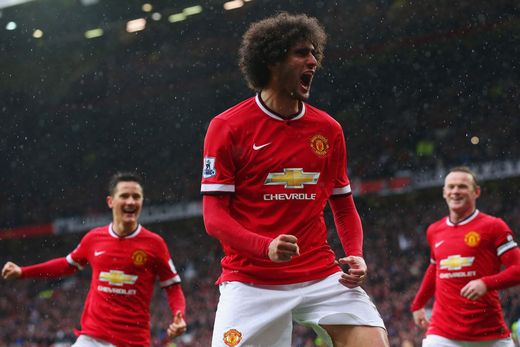 United secured a 70th Manchester derby victory over rivals City with a superb 4-2 victory at a jubilant Old Trafford on Sunday that extends the Reds’ lead over the Blues to four points.
It was another fine performance from Louis van Gaal’s men who responded brilliantly after going behind to an eighth-minute Sergio Aguero strike. Ashley Young levelled on 14 minutes before setting up Marouane Fellaini to head home. Juan Mata slotted home a third after the hour, before Chris Smalling completed United's scoring with a fourth soon after. Aguero pulled a consolation back near the end, but the game was already effectively over by that point and the hosts were down to 10 men after Michael Carrick limped off.
Van Gaal made one change to the side that beat Aston Villa 3-1 in the previous game, with Smalling, sent off against City earlier in the campaign, replacing Marcos Rojo, who dropped to the bench, in the centre of the defence alongside Phil Jones.
City arrived at a rain-soaked Old Trafford on the back of three away defeats, while the Reds were going in search of a sixth straight Barclays Premier League victory. The Reds started on the front foot in the opening couple of minutes but it was the visitors who had the first opening of the game and struck the early blow after just eight minutes.
After David De Gea saved well with his legs from Jesus Navas, who found himself through on goal thanks to a long ball from Martin Demichelis, the Reds survived a couple of scares from a couple of resulting corners. But in the same passage of play, Gael Clichy found James Milner down the left, who slipped a pass into the onrushing David Silva and he found Aguero who tapped into an empty net. 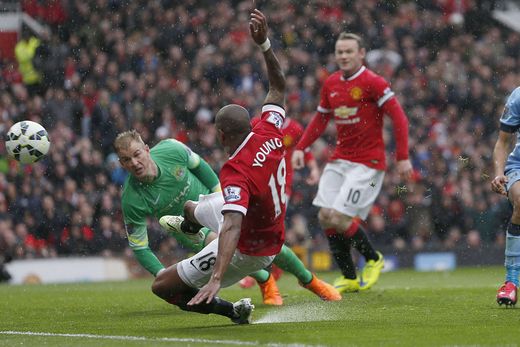 It was a sucker punch for the Reds but Louis van Gaal’s men ensured the best possible response with an equaliser six minutes later. De Gea, who had been the busier of the two goalkeepers to that point, scampered from his area to clear upfield after Aguero looked to get on the end of Jones’ back-pass. Fellaini flicked the clearance on to Ander Herrera, out on the left wing, and his low cross was smashed home from close range by Young, after his initial attempt was blocked by Clichy. 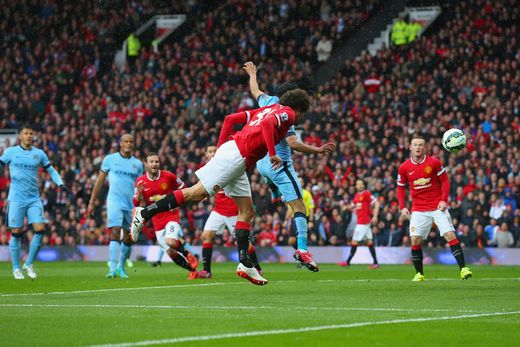 Young turned provider on 27 minutes as United took the lead after some great possession play. The highlight of the move was a neat one-two between Daley Blind and Young around the box before the ball came back to the latter and his excellent cross to the back-post was headed home by Fellaini as the ground exploded.
Van Gaal’s men grew in stature as the half went on, but City still looked dangerous going forward. Yaya Toure almost put Aguero clear on 34 minutes, but De Gea was alert to the danger once more, while at the other end, a studs-up challenge from Vincent Kompany on Blind led to a yellow card rather than a red.
Kompany did not appear for the second half after being replaced by Eliaquim Mangala and City’s defenders had Joe Hart to thank on 53 minutes when he prevented the Reds from increasing the advantage. The City stopper dived to claw away a superb Wayne Rooney free-kick and he was also on hand to block a follow-up effort from Carrick. 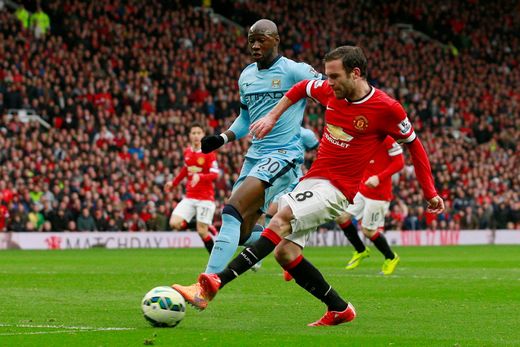 Hart could do nothing stop United making it three on 67 minutes however, as Mata raced on to a pass from Rooney and calmly slotted home through Hart’s legs in front of a jubilant Stretford End.

Seven minutes later, things got even better for the home side as Young sent a free-kick in from the left wing for the unmarked Smalling to head home and spark thoughts of avenging the 6-1 loss to the noisy neighbours.
However, after the outstanding Carrick limped off, Aguero pulled a consolation back for City late on, despite De Gea's best efforts to keep it out, but it was too little too late as United moved a point behind second-placed Arsenal and ensured derby bragging rights belong to the red half of Manchester.

#MUFC produced a clinical derby-day display to see off rivals Manchester City and claim the local bragging rights with a...