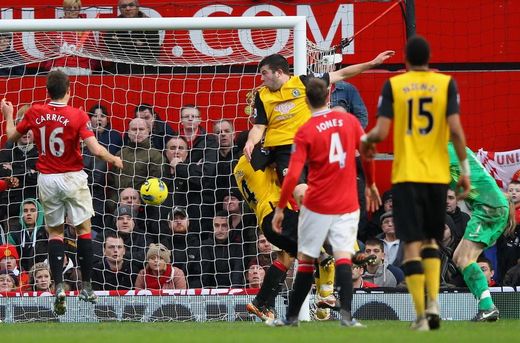 Manchester United made it an unhappy 70th birthday for manager Sir Alex Ferguson by slipping to a shock 3-2 home defeat to Blackburn Rovers.

After conceding two goals to Yakubu either side of half-time - the first one a penalty - the Reds battled back magnificently to draw level courtesy of a double by Dimitar Berbatov. However, Grant Hanley scrambled a late winner for Rovers against the run of play to ensure the champions finished 2011 on a low note, missing out on the chance to go top of the table.

United's injury problems led to Rafael and Ji-sung Park forming a makeshift central midfield partnership with Michael Carrick continuing in defence. Rovers had problems of their own with David Dunn and Junior Hoillett adding to the list of absentees.

Steve Kean's side didn't start like a team at the foot of the table as they passed the ball around with composure while the Reds started with unusual lethargy. Nani sent a left-footed shot wide and Carrick was squeezed out by Mark Bunn at the near post from a Nani corner but Paul Robinson's deputy in the Blackburn net was rarely troubled.

Disaster struck when awkward customer Chris Samba was felled inside the box as he grappled with Berbatov following a long free-kick by Bunn. Mike Dean had no hesitation in pointing to the spot and Yakubu nervelessly sent David De Gea the wrong way to stun Old Trafford with 16 minutes on the clock.

United's response was muted. There was a shout for another penalty when Patrice Evra was sent flying by Radosav Petrovic and man-mountain Samba got his head in the way of a Danny Welbeck drive but the Reds were showing little of the sparkle of the recent fixtures.

Phil Jones was denied a goal against his former club when he met a Nani corner but could only fire against team-mate Javier Hernandez. The Mexican tried to atone with a firm shot from outside the area that flew wide after some fine play by Evra before Nani lashed over after an intricate move inside the box.

Berbatov escaped after another grappling match with Samba at the other end but it was largely one-way traffic and the champions finally started to build a head of steam as half-time approached. Nani, the likeliest source of inspiration, finally extended Bunn with a snap-shot after controlling an Evra cross and the keeper also thwarted Hernandez at his near post as the pressure grew.

Frustrated by some time-wasting antics from the visitors, United played with more fire and the end to the opening 45 minutes at least showed promise of an improved display after the break with Samba hacking over his own bar from another dangerous centre by Nani. Sir Alex introduced Anderson for Hernandez at half-time and reshuffled with Rafael, Nani and Valencia all switching positions.

After Nani had the first effort of the second period, looping a curler over the bar, Rovers doubled their lead with a goal out of nothing. The excellent Yakubu went through Carrick's slide tackle and advanced past Jones to bury a fierce drive under De Gea.

This time, the response was immediate. Rafael drove into the box and fired across goal for Berbatov to steer in a diving header to reduce the arrears and get the crowd on its feet. There is no finer sight in football than Manchester United attacking the Stretford End with gusto and, for the first time in the game, the visitors started to creak.

Bunn kicked away an Evra cross at his near post but was beaten again on 62 minutes when Rafael headed to Valencia and the Ecuadorian, revelling in a return to his familiar right-wing role, sped past a couple of defenders to tee up a firm finish by Berbatov for his second goal of the match and his sixth in three games.

A great run by Rafael led to Berbatov's cross being scrambled away and Jones headed wide from a Valencia cross as the champions attempted to take the lead for the first time in the match. Although Mauro Formica offered a deflcted shot off target at the other end, the Reds had the upper hand and Valencia thrashed a volley over the top when the ball fell to him at the far post.

However, with 10 minutes left, Hanley headed into the air by beating De Gea to a corner and showed enough desire to get the second ball himself through a crowd of players, nodding over the line to the immense frustration of most of the Old Trafford crowd. It was a sloppy goal to concede and it left United with a mountain to climb in the closing stages.

After Berbatov headed a Carrick cross over, a final throw of the dice saw Will Keane introduced for his senior debut in place of Rafael. But there were to be no late heroics and no salvation for the Reds, despite dominating much of the encounter. Keane was denied by a last-ditch Samba tackle and Jones was frustrated by what looked like a combination of Bunn and inadvertently Keane on the line.

Ultimately, the injury problems meant this was one match too many over the festive period and Sir Alex must pick his troops up for the testing trip to Newcastle in midweek.

David De Gea
Will be disappointed with Grant Hanley's winner as the burly defender beat him in the air and he could do little about Yakubu's strikes. Assured with the ball at his feet, as usual.

Antonio Valencia
Displayed good distribution from the outset but really came to life when moved up to right wing in the second half. Set up Dimitar Berbatov's equaliser with a classic run past defenders and there is no doubt he is back to his best form.

Michael Carrick
Made some notable challenges and interceptions in his unfamiliar central defensive role but found Yakubu a difficult opponent all afternoon. Denied by Mark Bunn from a Nani corner and booked for a foul on Mauro Formica, he was unable to prevent Yakubu running on goal for his second strike, the ball unluckily deflecting off the Rovers striker and into his path.

Phil Jones
A rough challenge on Formica showed there was no time for sentiment against his old club and he almost scored on a couple of occasions, denied by inadvertant blocks by team-mates Javier Hernandez and Will Keane in each half. Also steered a header wide and switched play nicely during the second half.

Patrice Evra
Fouled on his first foray forward, he showed plenty of skill and also some great chest control during his raids down the left. One dangerous cross was kicked away by Bunn at his near post but he was unable to unlock the visiting defence.

Nani
Showed magical footwork and a desire to make things happen, even backheeling a free kick on one occasion to exude confidence. A couple of ambitious attempts were off target and he lifted a curler over the bar at the start of the second half. It was unusual he wasn't involved in the goals but he recovered from a heavy challenge.

Rafael
Started in the heart of midfield but looked more at home at right-back after the break. One mishit pass still found Ji-sung Park, much to everybody's amusement, but some of his stirring work in the second half was outstanding. It was his run that led to Berbatov pulling one back, his header that released Valencia for the equaliser, and he had another slalom that created an opening for the Bulgarian.

Ji-sung Park
Approached his task with his usual vigour and tried hard in a new partnership with Rafael in the first half. After putting so much into the win against Wigan, he could have been excused for tiring late on but he still got in some timely tackles and interceptions and attempted to keep the Reds moving forward. His best moment was a cross from the left that was headed away by Hanley at full stretch with Nani waiting to pounce.

Danny Welbeck
An early change of pace impressed the crowd and he had a shot headed away by Chris Samba. Worked hard but the ball never fell for him around the penalty area and most of his best stuff came out on the flanks and in a deeper position.

Javier Hernandez
Endured a largely frustrating first half before being replaced as he was starved of service. Got in the way of a Phil Jones shot following a corner before lashing a decent attempt wide from outside the area. Linked the play when dropping into midfield but was crying out for a chance inside the box.

Dimitar Berbatov
After conceding the penalty for hauling Samba down, he made amends with a double strike to continue his fine form in front of goal. A diving header and sweetly-struck clinical finish gave United real hope of going top but, alas, it wasn't to be. A much bigger influence after the interval than he had been in the first period and he didn't deserve to be on the losing side.

Anderson (for Hernandez, 46)
A raking pass wide showed his intention to get involved and he was harshly penalised for a tigerish sliding challenge. Showed admirable spirit on his return from injury, ahead of schedule, and saved a certain goal late on when tracking back to rob Radosav Petrovic.

Will Keane (for Rafael, 85)
A first-team debut for the young striker who showed a neat touch but was unable to profit during a couple of injury-time goalmouth scrambles, once when the ball struck him on the deck from a Jones shot in the dying seconds.